BERLIN — High-jump queen Blanka Vlasic retained her world crown on Thursday when she saw off arch-rival and local favourite Ariane Friedrich to win gold at the World Athletics Championships.

Vlasic was the only athlete to clear 2.04m in the electric atmosphere of Berlin's Olympic stadium while Russia's Anna Chicherova took the silver with a season's personal best 2.02m to leave Germany's Friedrich with the bronze on count back. 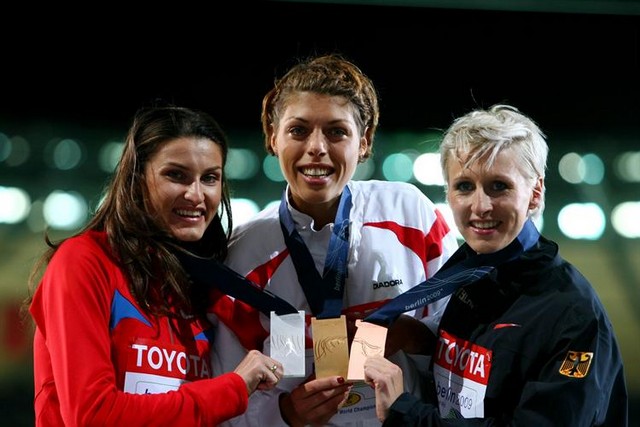 Three charming ladies showing their deserved medals in Berlin 2009. Photo by Guliver/Getty Images.
"I did not expect 2.04m to be enough for the victory," admitted Vlasic, who failed with her three attempts to break the world record of 2.09m and promptly burst into tears when she later received her gold.

"I was expecting it to go much higher, but I was concentrating on my own heights and on staying calm.

"2.04m means nothing to me, I would have been happy with a new personal best. These championships are perfect and I was ready to give everything I had to win." 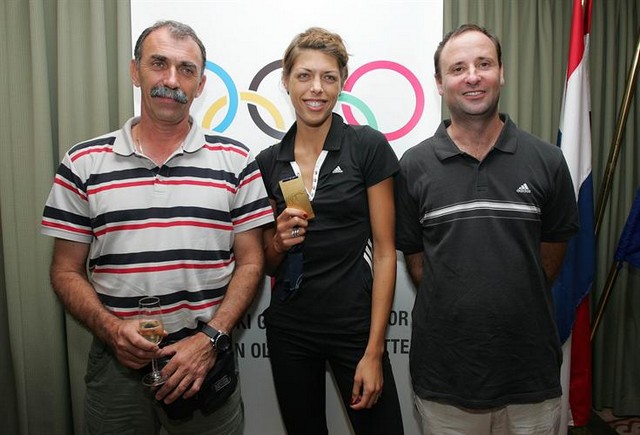 Shining Blanka Vlaąić with her proud father Joąko on the left and delighted trainer Bojan Marjanović. This was her second gold medal on world championships, the first one was won in Osaka Japan in 2007. Pohoto by Davor Pongračić.
Russia's Chicherova said he had used the much talked about rivalry between Friedrich and Vlasic to her advantage.

"This second world silver is very important to me," she said. "I had to be very patient to come back from surgery. I didn't expect a medal and actually nobody thought about me either.

"I saw the newspapers with medal predictions and the pictures of potential medallists, but I didn't find mine." 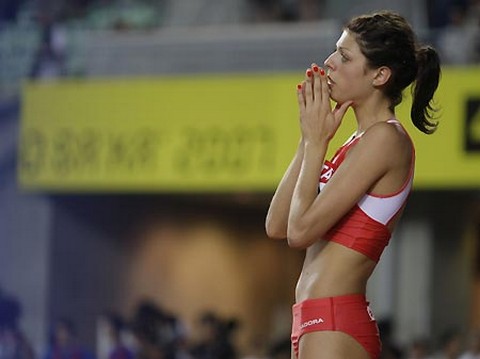 It was another battle royale between Friedrich and Vlasic, who has now leveled the series at 3-3 since the German famously beat her in Brussels last season to deny the world champion a share of the one million dollar Golden League jackpot.

"It was amazing, so much fun to jump here," said Friedrich, who just missed clearing 2.06m. 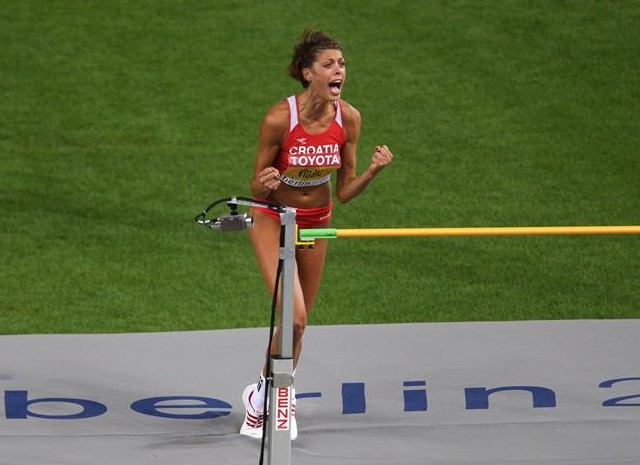 Blanka Vlaąić after her winning jump at The World Championship in Berlin 2009. Photo by Guliver/Getty Images.
"It was unbelievable, I had so much pressure. I am so proud to have won this medal. It means everything to me and I will celebrate it.

"It was damn loud in this stadium. I have never experienced such a thing before. It was a fantastic competition. I missed the 2.06m only by a hair's breadth." 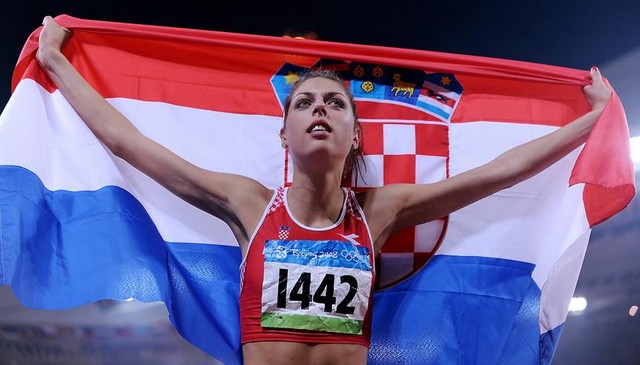 Blanka Vlaąić with the national flag and Croatian Coat of Arms on one of previous competitions.
Vlasic had to battle her way into the final here after picking up six stitches from the head injury she suffered in a freak accident while warming up for Tuesday morning's qualification.

Having missed out on Olympic gold to Belgium's Tia Hellebaut in Beijing, Vlasic choked back the tears after Friedrich's failed attempt to clear 2.06m gave her gold as she retained her world crown from Osaka two years ago.

Friedrich had begun the competition by electing to pass on the opening height of 1.85m, but then breezed over at 1.92m.

Chicherova, who claimed the bronze medal at last August's Beijing Olympic Games, was the first athlete to clear 2.02m to throw down the gauntlet to Vlasic and Friedrich. 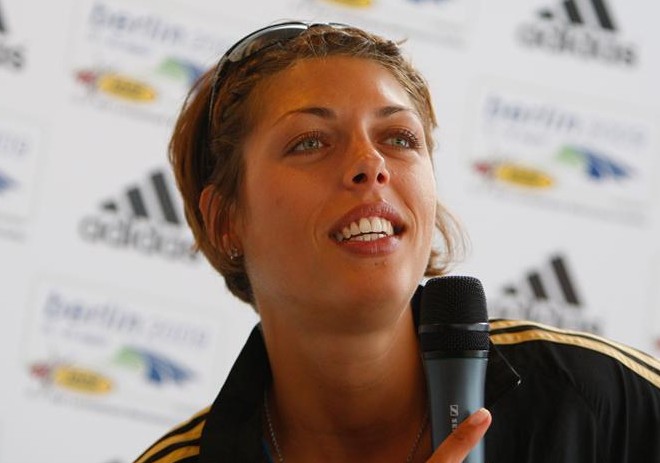 Blanka Vlaąić during one of her numerous public appearances.
Vlasic showed perfect technique to clear the height at the second time of asking, but her German rival clipped the bar on both of her first two attempts.

She cleared at the third attempt to stay in the fight for the gold medal as the crowd roared their approval.

All three rivals got nowhere near clearing 2.04m on their first attempts.

Friedrich took off far too early on her second attempt, but Vlasic piled the pressure on her German rival by clearing at the second time of asking.


... Please rise for the national anthem of Croatia ...

Chicherova then failed to clear 2.04 on her third attempt to go out.

With everything hanging on her final jump, Friedrich had the bar raised to 2.06m and with total silence in the stadium looked to have cleared until she clipped the bar with her heel.

Her mistake handed Vlasic the gold and the Croatian then opted to attempt to jump 2.10m in a bid to break Stefka Kostadinova's 22-year-old world record of 2.09m, but she was nowhere near with any of her three tries. 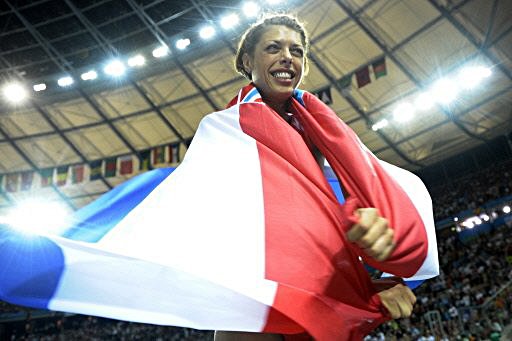 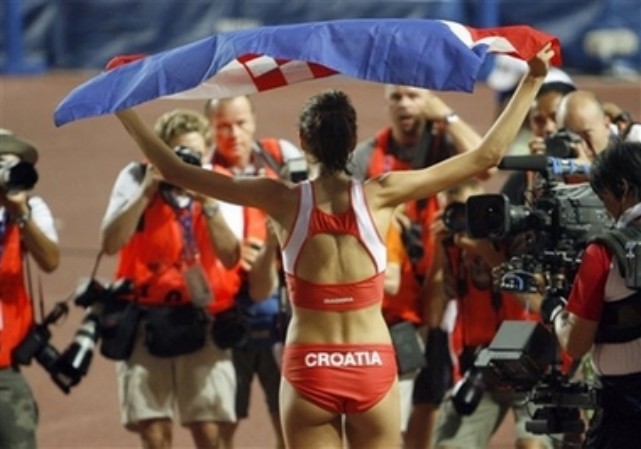