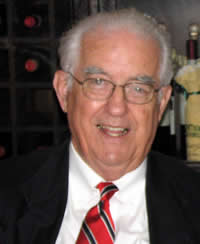 Leo Anthony Majich, age 82, was born July 17, 1925 in Los Angeles and died April 10, 2008 in Pasadena after a brief illness. He graduated in 1943 from Loyola High School and in 1950 from Loyola University (Los Angeles). Leo enlisted in the U.S. Army Air Corps in 1944 and was a member of the 20th Air Force in the Marianas and Philippine Islands.

Between 1951 and 1971, he was Secretary-Treasurer of Vido Artukovich & Son, Inc. The company engaged in the construction of infrastructure for the cities and counties of Los Angeles, San Diego, San Francisco, the  Metropolitan Water District of Southern California and other public  agencies. He served as president of the Southern California Chapter of the Associated General Contractors in 1966 and 1967. Between 1954 and 1972, he served as a trustee on several employee benefit plans,  including service as Chairman of the Board of Trustees of the Operating Engineers Trust Funds from 1960-1971. Between 1968 and 1972, he served as Chairman of the Southern California Construction Industry Collective Bargaining Committee, which was responsible for the negotiation of  agreements with several Building Trades Unions.

From 1972 to the present Leo has been employed as the Fund Manager of the Operating Engineers Trust Funds, with assets of over $2 billion, which provides benefits for over 35,000 participants. Appointed by Supervisor Pete Schabarum, Leo also served for three years as a member of the Board of Investments of the Los Angeles County Employee Retirement Association, a pension fund that provides benefits to retired Los Angeles County employees. He served for five years as a member of the Los Angeles County Government Economy and Efficiency Commission and  was Chairman of Affiliated Health Funds, Inc., a coalition of health plans seeking to reduce healthcare costs.

In 1994 he was appointed to the Order of the Knights of St. Gregory the Great by Pope John Paul II, the highest honor the Catholic Church confers on a layperson for service to the Church and the good example set in their communities and country.

In honor of his Herzegovinian Croatian heritage, Leo was a kolo dance instructor as a young adult. He was a founding member of the Croatian American Association as well as the National Federation of Croatian Americans, serving several terms as its Western Region vice-president. He was a longtime delegate of the Croatian National Association (Udruga), serving as its president during the Croatian War of Independence from 1991 to 1995 when they helped to support Croatia's fight for  independence. He was also the president of the Building Committee of St. Anthony's Croatian Catholic Church where he oversaw the building of the church's magnificent parish center opened in 1996.

Leo truly enjoyed being a father and grandfather and is survived by a large and loving family the love of his life and wife of 56 years, Eva (Artukovich), his dearly loved children: Theresa Goodell, Anthony Majich (wife Sue), Tom Majich (wife Kristine), Paul Majich (wife Elizabeth) and Evie Weisenberg (husband Michael), 13 grandchildren: Justin Majich, Angela (Jessy) Gray, Katherine and Julia Majich, Tom (Joy) Majich, Melissa (Michael) Keeslar and Steven Majich, Roxanne, Marilyn, Rachel and Natalie Majich, and Emily and Peter Weisenberg, his great-grandchild, Leo Christopher Majich, and many nieces and nephews. He is also survived by his sisters Eva (James) Toomey and Jean  (Richard) Hart. He will be sorely missed by them all as well as by his many friends and colleagues. Leo is preceded in death by his parents, Peter and Stella Majich, and his brother Peter L. Majich.

Formatted for CROWN by Marko Puljić
Distributed by www.Croatia.org This message is intended for Croatian Associations / Institutions and their Friends in Croatia and in the World. The opinions / articles expressed on this list do not reflect personal opinions of the moderator. If the reader of this message is not the intended recipient, please delete or destroy all copies of this communication and please, let us know! Or simply...enjoy and spread the word and good vibrations.