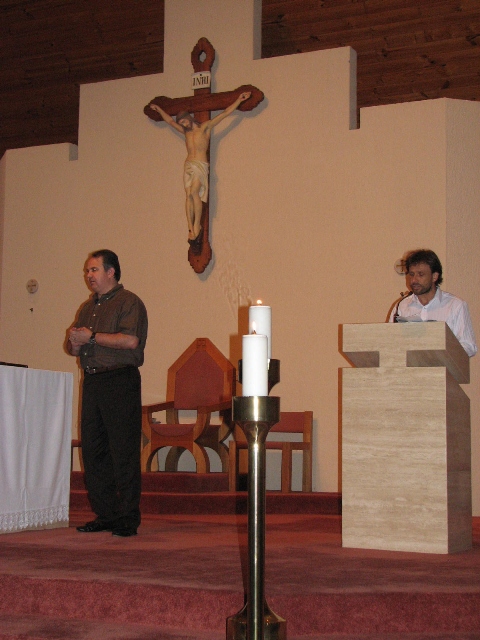 Ivan Dragicevic was one of the six children who had witnessed the apparitions of the Blessed Mother Mary in a small village named Medjugorje in Herzegovina. The first of these apparitions occurred on 24 June 1981. From that day, Our Lady has been appearing regularly to Ivan and the other five "visionaries" to give her messages to the world. Additionally, each of these six visionaries were to receive each from the Blessed Virgin Mary ten 'secrets' or happenings that will occur on earth in the near future.

Ivan and the visionaries travel around the world to spread Our Lady's messages. He lives with his family in the United States for half of the year and stays in Medjugorje when he is not travelling to parishes in countries which had requested him to share the messages of Our Lady of Medjugorje.

For the fifth time, Ivan recently came back to Australia in his mission to share the love and messages he has been receiving from Our Lady. After the talk in Christchurch, New Zealand he arrived in Australia on 19 February 2008. First of his talks in Australia was in Melbourne, Victoria followed by six other places in the states of New South Wales and Queensland. The last of these talks was held on 26 February at The Sacred Heart in Pymble, a suburb in the Sydney area in New South Wales. It was here where my mother and I, together with an estimated 1200 people, had a memorable and nurturing spiritual experience. I am sure that I will not be able to capture what everyone experienced by being in the same place and listening to someone who had been so blessed to see and talk with Our Lady. I hope, however, what I write will be read with an open heart, so that somehow I will able to share the beautiful event dedicated to Our Lady. Rather than attempt to present a verbatim account of what Ivan said, I would offer what I understood to be his message.

The event was scheduled to start at 6 p.m. but the church was nearly full half hour before then, despite the fact that it was raining and a work day. There were people of all ages and cultural background eager to be part of a significant spiritual experience. At 6 p.m. the congregation prayed the rosary [Joyful Mystery]. At the middle of the second rosary [Sorrowful Mystery], Ivan came in and knelt at the altar.  The place hushed and stood still, that you could hear a pin drop.  Everybody knelt and prayed with him for more than ten minutes; the atmosphere was so surreal.

The rosary prayers were followed by the celebration of mass at 7 p.m.. Fr Tadeusz Seremet, Sacred Heart’s Parish Priest, concelebrated the mass with seven other priests. The prayers, responses and hymns were resounding and reflected deep involvement by everyone present. There were abundant forms available to people to write their petition for Our Lady’s divine intervention and blessing. These forms were placed in large cane basket at the front of the altar before the mass started.

Then the much-awaited talk by Ivan. As he walked up at the altar, once again golden silence enveloped the congregation. Ivan spoke in Croatian, with translations as he went along.  He started off by thanking everyone for heeding the call of Our Lady. He said that during his prayer with the congregation earlier in the evening, he felt that the Blessed Mother came during those moments.  The congregation indicated they did too.

Then Ivan took us back to 24 June 1981 at Podbrdo Hill, in the parish of Medjugorje in western Herzegovina. This was when and where the Gospa, the Mother of God, appeared before him and the five other children. He was sixteen years old at the time. He described the great fear they felt when they saw Our Lady’s image on the hill. Ivan was so scared that he ran home at great speed he did not know possible. When he got home, he did not tell anybody including his parents about what happened. He spent the whole night in great fear, questioning himself over and over if they had just imagined it or was it possible that Our Lady was really there.

Somehow, Ivan's parents already heard from the village that he was amongst the children who saw the image of Our Lady at Podbrdo Hill. The following morning, he and the other children told their respective parents of what they saw. Their parents were worried they would be put in jail for saying things that the communist government would not approve of.

Ivan shared that on the second day the six of them, together with lots of people following them, went back to the Hill at about 3 p.m. There they saw from afar Our Lady was waiting and holding Baby Jesus in Her arms. Then they were told to come closer. Ivan recalled that as they went towards her it felt like they were floating and he could not describe the feeling and the emotion as they faced her. Then Our Lady put Her hands on their heads and said Her first words:

"Dear children, I am with you. I am your Mother. Do not be afraid of     anything. I will protect you. I will help you, I will lead you."

At that moment, one of the girls asked her: "Who are you?" To which She replied:

This was the first message and the first words that Our Lady has given the world through Ivan and the other five visionaries. This was followed by more messages up to this time. They call for peace, conversion, praying from the heart, doing penance and fasting, strong faith and love, forgiveness and hope. Through these messages, Our Lady leads us to a meaningful life.

With his passionate and loving words, Ivan expressed his deep belief, trust and love for Our Lady. He also relayed the deep love Our Lady has for everyone. He fervently implored everyone to bring back prayers into their homes and families to be closer to God and have peace on earth and beyond, and to be guided in the way that we live by these prayers.

As Ivan completed his talk, there was almost a tangible feeling of happiness amongst us with the assurance that we are so loved by Our Lady and God, and that as God’s children we could spread love and peace with everyone.

My mother and I would have missed being part of a spiritually enriching experience had it not been for the information posted on the Croatian World Calendar. Our sincere thanks to Katarina Cuvalo and also to the Editor and other CROWN staff. But most of all, thanks to Ivan Dragicevic for bringing Our Lady of Medjugorje to Australia and all over the world. I hope that people everywhere in the world heed the messages of Our Lady and give world peace a chance.