CROATIA'S ANA JELUSIC EN ROUTE TO THE PODIUM (Gepa)
ZAGREB-SLJEME, Croatia - Marlies Schild of Austria won her fourth of five slaloms Thursday, claiming the Snow Queen Trophy on a tricky course that frustrated many other top contenders. Croatia's Ana Jelusic was second for her first career podium in front of the home fans, and Czech Republic skier Sarka Zahrobska third, while American Resi Stiegler, fourth after the first run in search of her first career podium, settled for fifth.

It was Stiegler's 10th career top-10 World Cup result, with nine of those coming in slalom. Her career best remains a fourth in the Are, Sweden, slalom last March. Thursday's result is her second-best performance ever, though a stronger second run would have landed her on the podium for the first time.áá

Schild lost a ton of time out of the gate on the second run as the Croatian spectators loudly booed her, hoping for a Jelusic victory. But she regained her composure and toasted the second half of the run to win by a large margin.áá

"I always try to ski as fast as possible so its normal to make those kinds of mistakes," she said after the race. "I was lucky that it was not as bad as in Semmering and that it happened in the upper part of the slope.

Schild, who underwent five knee operations in her teens, also won at Sljeme last season. "Im really pleased to have won once more that race which is quite special," Schild said. "Its definitely a tough course with much terrain and you had to ski with a lot of feeling. The snow was icy at the top but softer at the bottom so you had to find the right adjustment," said the Austrian, who received a check of 60,000 euros for her win - the largest purse on the womens tour. A total of 165,000 euros are given for the top-30 finishers.
á
"Special moment" for Jelusic

Jelusic was excited about her first ever World Cup podium on home soil after twice finishing fourth earlier this season, including last week at Semmering. "I wondered if I could manage such a result here despite the pressure from the crowd and the media and Im proud to have achieved such a performance in front of so many fans," said the young skier from Rijeka, who turned 20 on Dec. 29.

Its certainly a special moment for me, I have been aiming for this for a while, added the tiny Croatian who competes in her fifth World Cup season. I felt strong before the race but you never know what can happen. The great crowd encouraged me a lot this evening.

This result is a wonderful reward for all the hard work I put into ski racing in the past years. Its a great sport but you need to train very hard and it was not always easy for me because I kept studying in America in the summertime. I hope to keep that form for the coming races and be healthy next month at Are."
á
Sarka is super

Zahrobska too was extremely satisfied by her performance - the best since clinching a bronze medal in slalom at the 2005 FIS World Championships at Santa Caterina. "Its my first World Cup podium and it means a lot to me and my family which supported me for so many years," she said. "Its of course wonderful to have achieved that performance in such a big event in front of this big crowd.

"I had a strong season start with all these top-10 finishes since Aspen. I was particularly pleased with my fifth place in super combined at Reiteralm. I didnt ski well enough in the first run this afternoon so I had to be more aggressive this evening and its great to have clocked the fastest time in the second run.
á
Stiegler amped at the atmosphere

U.S. women's SL/GS head coach Chris Knight said the lack of snow in most of Europe has led organizers to inject snow surfaces, putting water directly into the snow to make the conditions more icy. "Every slope is injected now, so the conditions are new for some of the girls and they're having to adjust."

He was pleased with the U.S. effort, noting Mancuso - who equaled her best slalom finish -á has had limited SL training while coming back from hip surgery in the spring. "I think Julia realized she can still ski slalom," he laughed.

"They put on a good show and the organizers were great ... and the crowd is just fantastic. They get 25, maybe 26,000 people up there along the course and I don't think you could get any more up there," he said.
ááá
"For me," Stiegler said, "this is my favorite race of the year. I've been here since the first race [Jan. 20, 2005 - she was 10th]. I'd never had a race where there were so many people; we just don't have that anywhere else ... they line the course and it's so enthusiastic. They support everybody and you feel like, 'This is what I wanted to do as a little kid' - even if you don't do well ...
ááá
"Where I am right now is awesome," she said. "I've never been third or fourth after the first run. It was longer than last year; I felt I was all over the place ... I swear it wasn't that long before, so you just had push through.
áá
"And the snow was different - the consistency changed midway from the catchy snow at the top to more of a California sweet ... but, whatever, it was fun, like it's always been."
ááá
Knight said Richardson is still in the learning process. "She was 15th in the first run and then had a three-minute [TV] delay before she got to start her second run, so she looked a little stiff to start her run, but she had some really good sections. It was another good day for her ... and Lindsey, after going down her hip in the first run, struggled a bit to refind her rhythm, but came on strong."
á
Women head to Slovenia
ááá
Two-time overall champion Anja Paerson was leading with only Schild to go, but fell in the lower section after her upper arm clipped a gate. Therese Borssen, who won the last slalom in Semmering, Austria, also crashed out while leading.
ááá
Schild, who leads the overall standings, is dominating women's skiing with reigning World Cup overall and slalom champion Janica Kostelic taking a year off due to chronic back and knee problems. Paerson has also struggled to recover from knee surgery.
ááá
Kostelic criticized the strength of the women's circuit in her absence. ''I don't miss being away from competitive skiing, there doesn't seem to be any style or flair in it,'' Kostelic said. ''The level of skiing is pretty weak - with the exception of Schild, who is technically too strong, and Paerson, who is still recovering from injury.''

Beset by unseasonably warm weather and a shortage of natural snow, race stewards battled to prepare the Sljeme course, which is the longest slalom piste on the women's circuit at 650 meters.
ááá
The next womens races are scheduled this weekend in nearby Slovenia, in Kranjska Gora, where a giant slalom and a slalom are held on the demanding Vitranc course normally used by the men.
ááá
"I'm think there's going to be some serious separation there," said Steve Porino, who called Thursday's race. The former U.S. Ski Teamer said he believes the top-15 finishers at Kranjska Gora will be separated by as much as 4 1/2 seconds.
ááá
"I'm assuming that the conditions aren't a whole lot better at Kranjska Gora, and Zagreb is pretty easy terrain and Kranjska Gora is really steep on the bottom. It'll be the toughest hill [the women] have been on and I think there's going to be a lot to separate the girls from the women there," Porino added.
á
- Patrick Lang, Sam Flickinger, USSA and The Associated Press contributed to this report
á
á
THE SCOOP
á
By Hank McKee
á
Equipment
Women's slalom (night) Zagreb-Sljeme, Croatia, Jan. 4, 2007
Skier, skis/boots/bindings
1 Schild, Atomic/Atomic/Atomic
2 Jelusic, Atomic/Salomon/Atomic
3 Zahrobska, Head/Head/Tyrolia
4 Costazza, Rossignol/Rossignol/Rossignol
5 Stiegler, Dynastar/Lange/Look
6 Poutiainen, Volkl/Tecnica/Marker
7 Bergmann-Schmuderer, Head/Nordica/Tyrolia
8 Mancuso, Rossignol/Lange/Rossignol
9 Zuzulova, Rossignol/Rossignol/Rossignol
10 Moelgg, Rossignol/Lange/Rossignol
á
Women's slalom, Zagreb-Sljeme, Croatia, Jan. 3, 2007 & The Snow Queen Trophy race and the only race scheduled for Croatia this season. & It is the 14th race of the women's 37-event World Cup schedule. & It is the fifth of nine scheduled slaloms. & It is the second consecutive night race following Semmering Dec. 29.
ááá
It is the 12th career World Cup win for Marlies Schild. & Her 10th in slalom. & Her third in a night slalom. & It is her fifth win of the season. & Her fourth in slalom. & Her first of the season in a night slalom. & She has won four of the five slaloms held this season, finishing third in the other after holding a large first-run lead. & It is her second win at Zagreb, having also claimed the win Jan. 5, 2006.
ááá
It is the first career podium for Ana Jelusic. & Her previous best had been fourth at Levi Nov. 11 and at Semmering Dec. 29, both this season. & It is the best result ever for a Croatian in a race held in Croatia.
ááá
It is the first career podium for Sarka Zahrobska. & Her previous best being fifth in combined at Reiteralm Dec. 15 this season, in slalom at Region Arber Feb. 8, 2004, and in a knock-out slalom at Sestriere Dec. 14, 2002. ... It is the first podium in history for a racer from the Czech Republic though Jana Soltysova, Olga Charvatova, Ivan Pacak, Miloslav Sochor and Bohumir Zeman claimed podiums for Czechoslovakia. 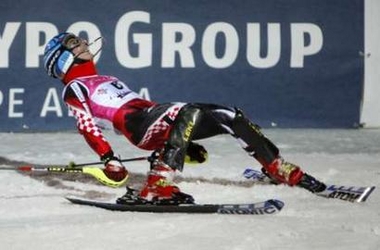 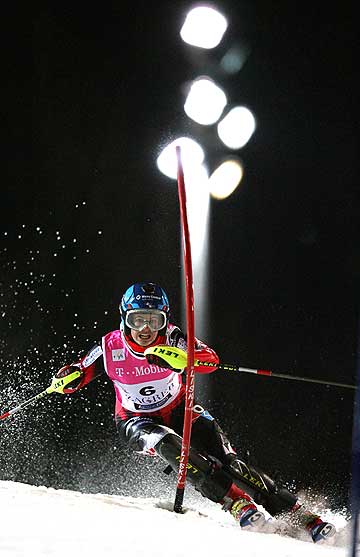 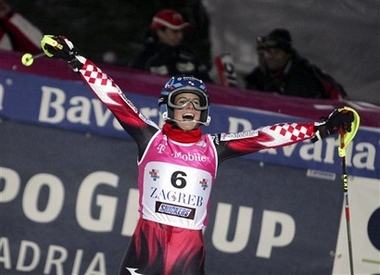 Formated for CROWN by á Marko Puljiµ
Distributed by www.Croatia.orgáThis message is intended for Croatian Associations / Institutions and their Friends in Croatia and in the World. The opinions / articles expressed on this list do not reflect personal opinions of the moderator. If the reader of this message is not the intended recipient, please delete or destroy all copies of this communication and please, let us know! Or simply...enjoy and spread the word and good vibrations.