CROWN - Croatian World Network - http://www.croatia.org/crown
Vjeko Martinko director of Hotel Villa Astra in Lovran celebrating his 70th birthday in October 2017
http://www.croatia.org/crown/articles/11022/1/Vjeko-Martinko-director-of-Hotel-Villa-Astra-in-Lovran-celebrating-his-70th-birthday-in-October-2017.html
Nenad N. Bach and Darko ®ubrinić
By Nenad N. Bach and Darko ®ubrinić
Published on 10/16/2017
Opening the doors to guests who come to vacation but experience transformation: from visitors to friends, from distraction to peace 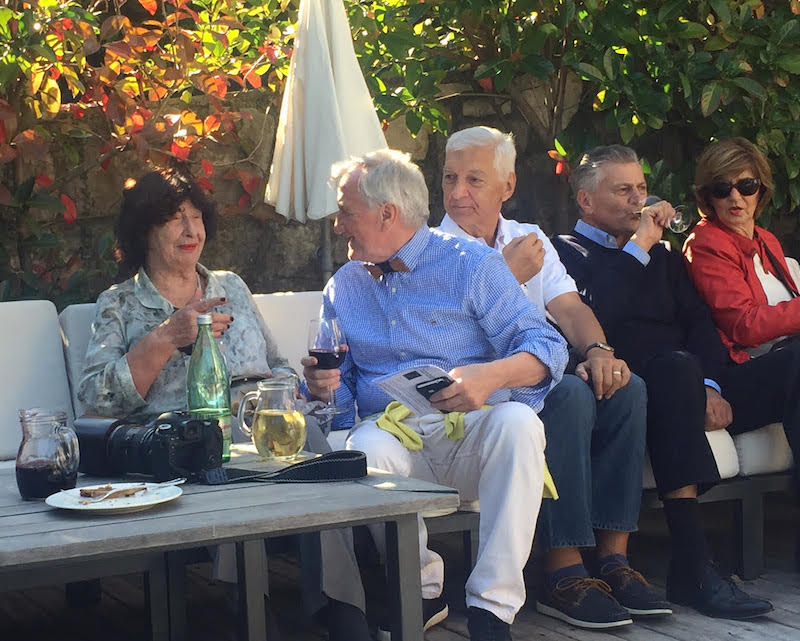 Vjeko Martinko with his schoolteacher Ana Ujević Vulas and other colleagues and friends, at the Hotel Villa Astra in the town of Lovran. 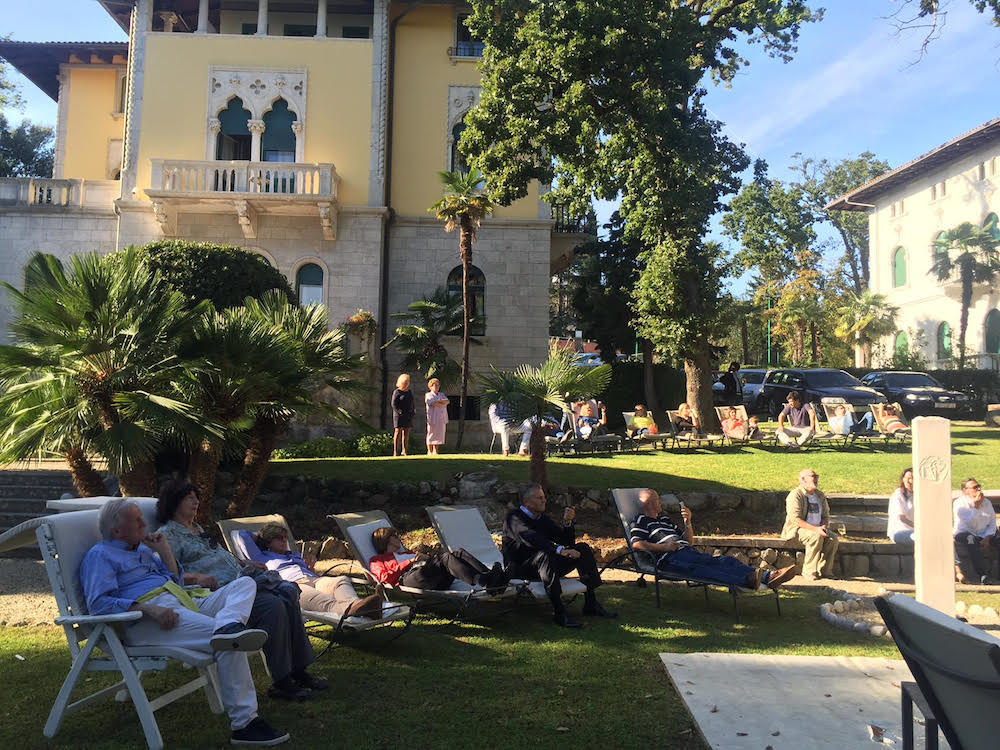 Watching acrobatic movements and skills of Dana Augustin (see her below on the left) in a very pleasant park in front of Hotel Villa Astra. Dana was born in the town of Ičići near Lovran. 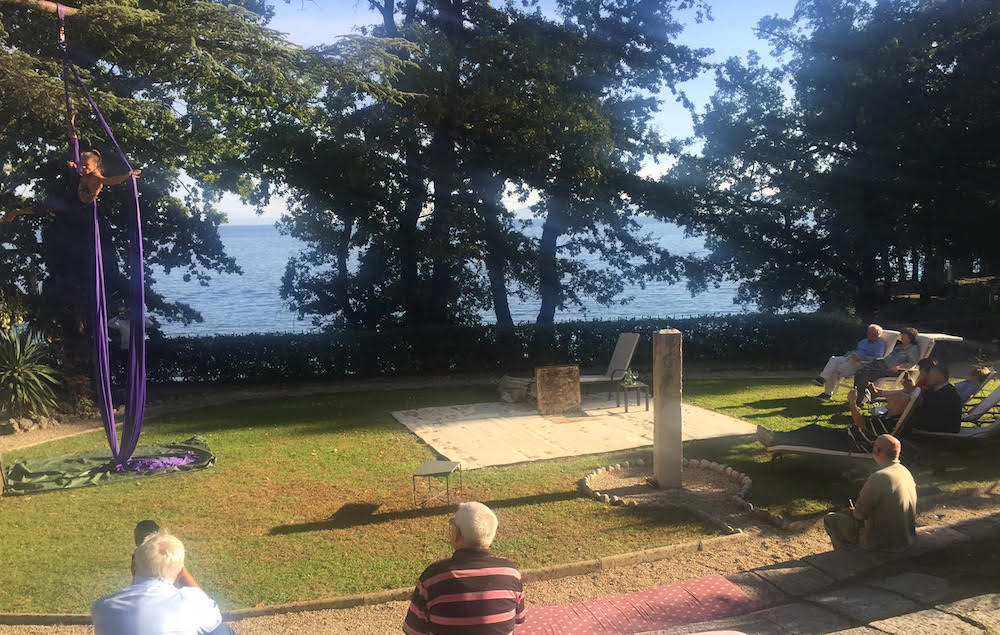 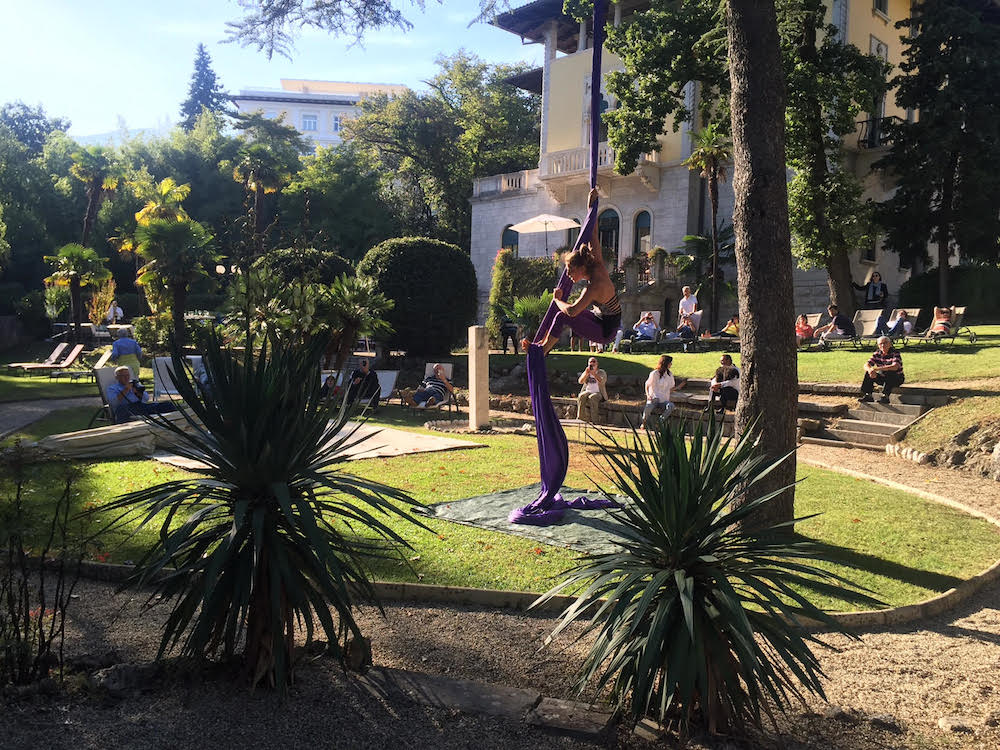 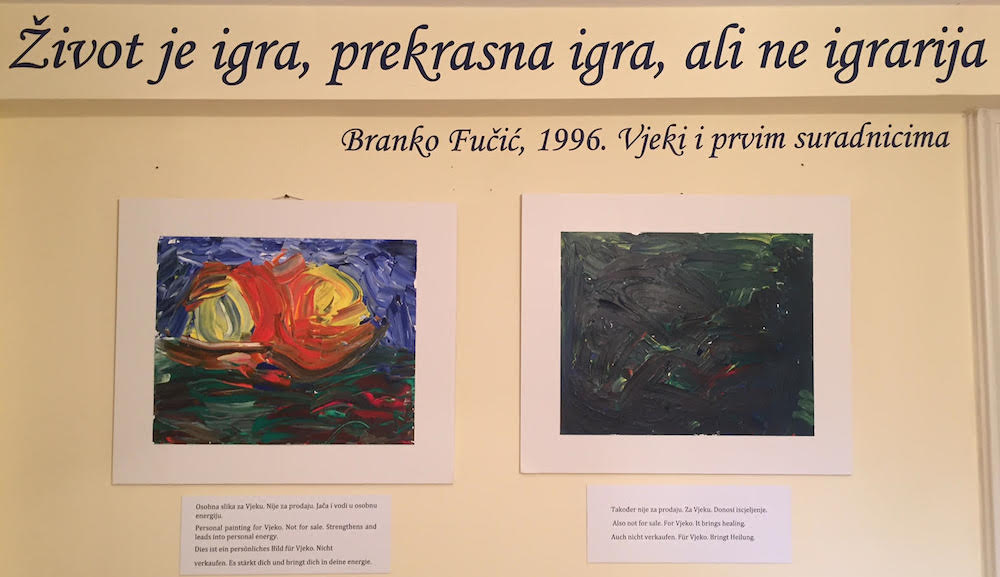 Branko Fučić to Vjeko and his collaborators, in 1996: Life is a game, beautiful game, but not a triviality 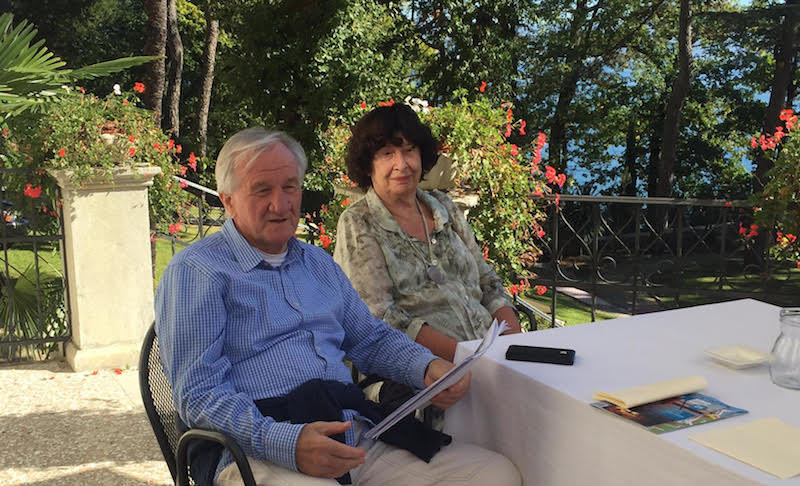 Vjeko Martinko with Ana Ujević Vulas, his schoolteacher.
She is a daughter of Mate Ujević, distinguished Croatian lexicographer. 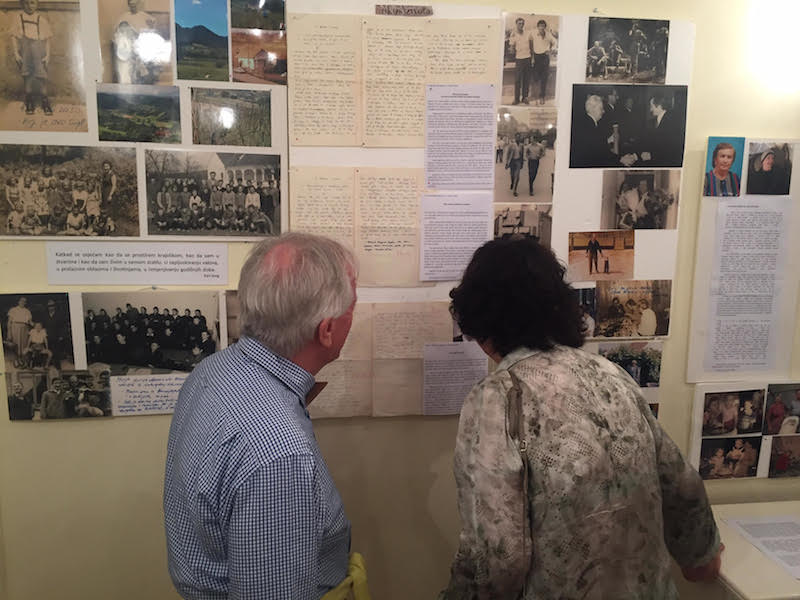 Vjeko Martinko prepared a lovely autobiographic exhibition in the Hotel Villa Astra to Ana Ujević Vulas, in which some of his works from childhood
have been shown, as well as his homeworks in Croatian language, written more than 50 years ago and corrected by Ana Ujević Vulas. 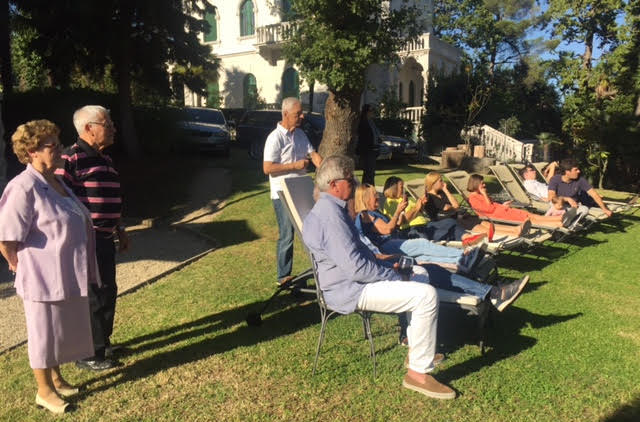 On the left, Slavica and Drago Banović, good friends and collaborators of Vjeko Martinko, originally from the city of Vukovar. 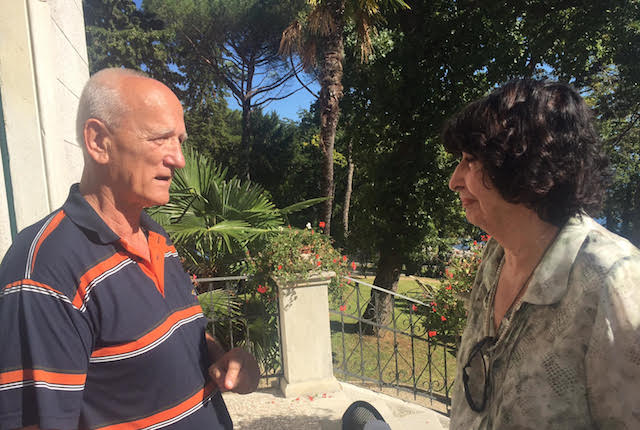 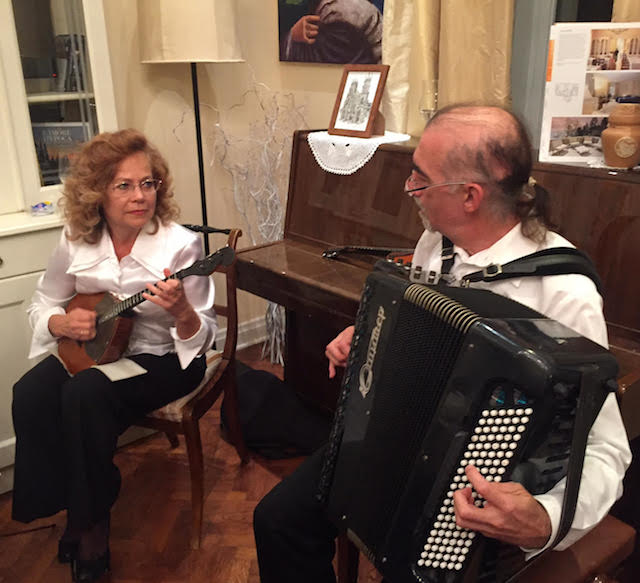 Natasha and Volodimir Balyk, fantastic music family living in the town of Lovran, playing for Vjeko at Hotel Villa Astra

Happy birthday to Vjeko Martinko from the readers of the CROWN!
Mr. Martinko is wearing a beuatiful and very elegant suit made by Gena-Trogir co., directed by Boris Burić Gena. 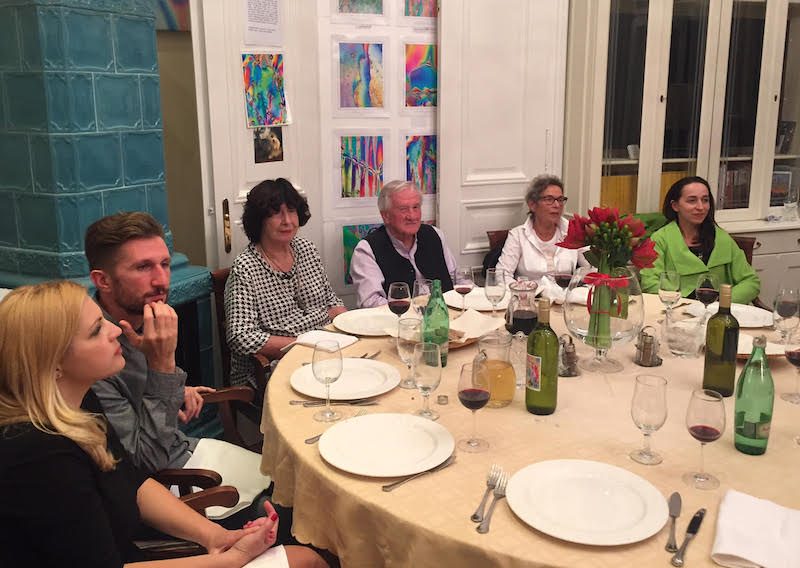 During the solemn celebration of Vjeko Martinko 70'th anniversary in his Hotel Villa Astra in the town of Lovran, October 2017. 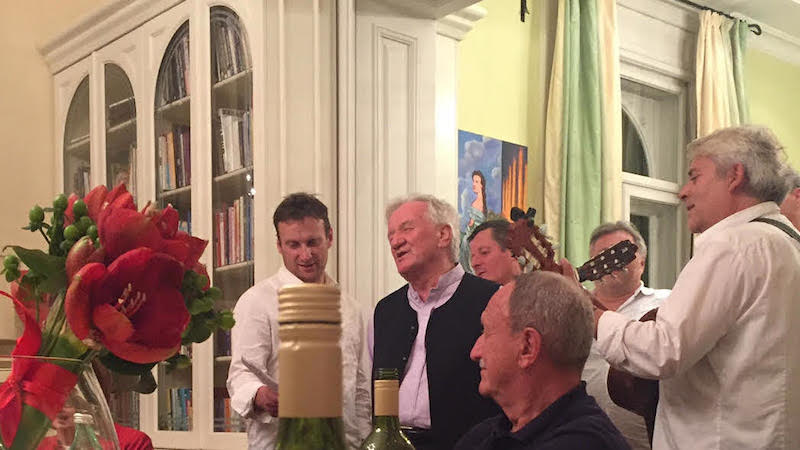 Vjeko Martinko, director of Hotel Villa Astra, singing some of favorite songs from his native region of Hrvatsko Zagorje on Croatian north,
accompanied with excellent klapa Nevera (The Tempest) from the vicinity of Lovran. 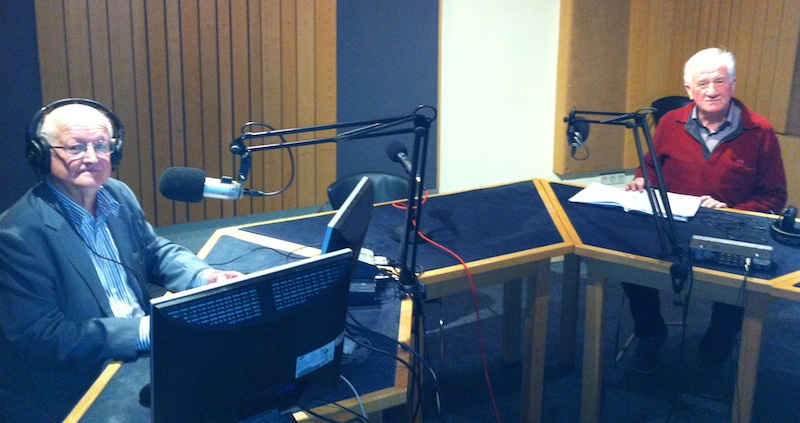 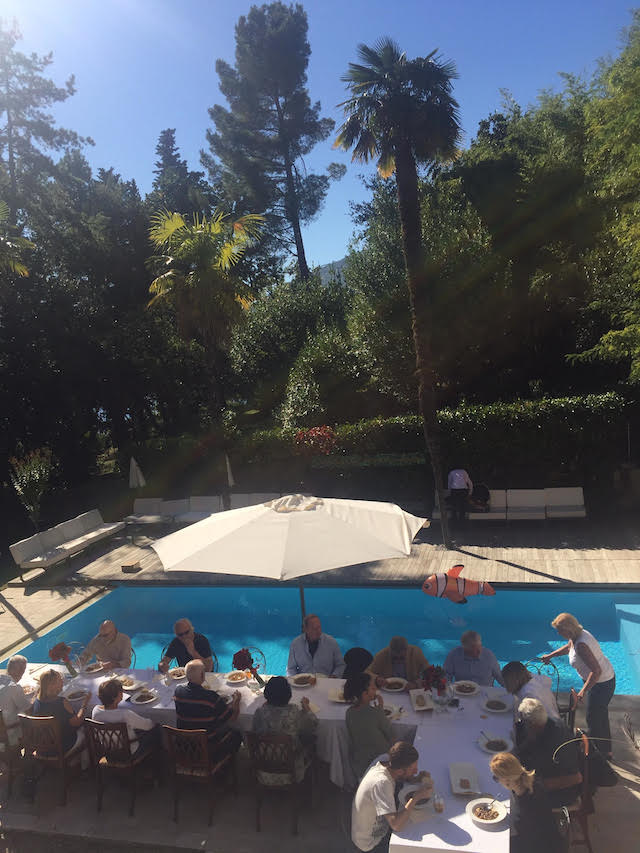 Lunch near the swimming pool at the Hotel Villa Astra, October 2017. 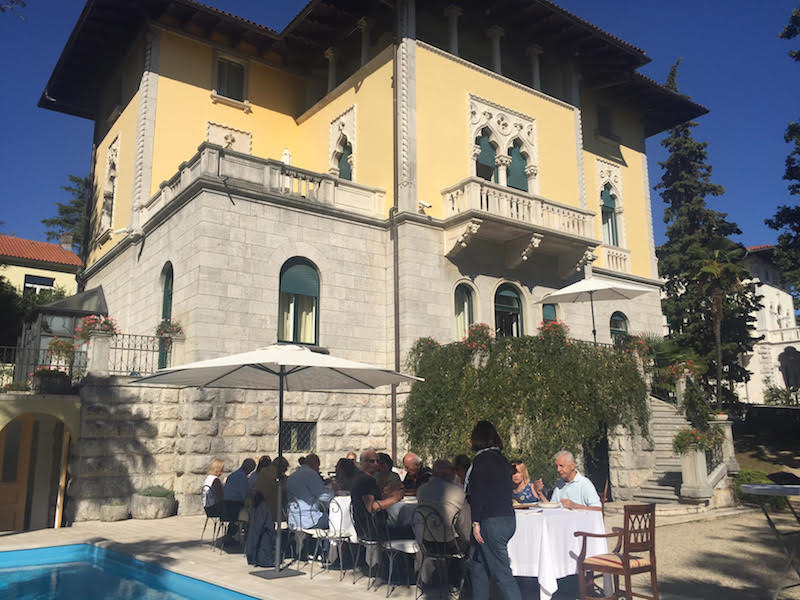 Origami created by Yoko Nishii, Japanese pianist fluent in Croatian language, during her visit
to Hotel Villa Astra in Lovran in 2016, upon the invitation of Vjeko Martinko.
Formated for CROWN by Darko ®ubrinićDistributed by www.Croatia.org . This message is intended for Croatian Associations/Institutions and their Friends in Croatia and in the World. The opinions/articles expressed on this list do not reflect personal opinions of the moderator. If the reader of this message is not the intended recipient, please delete or destroy all copies of this communication and please, let us know!