Now I was excited. Of course I could go. There was no doubt of that. Of course there followed a flurry of emails and phone calls to set everything up. Just before I began the 380+ mile trek for Houston I learned that Sunday would be "Consular Day" for the Croatians in Houston and there would be a gathering at the Croatian club in the evening. A chance to see so many of my Croatians friends in Houston and to meet the Ambassador too! Greg couldn't come this time so I was on my own and I went up on Saturday so I could have a little time to rest before all the fun began. On the way up I stopped in Rosenburg at the Police Department but that's a story for another time.

As I drove I had time to think about the phone call I had received the afternoon before. Fred had called. I went to High School with Fred. That was just about a half century ago, more if you consider we were in classes together all through Elementary School in Wharton, Texas. I had always admired Fred's mother as a kind and gentle woman who cared about people. She wasn't Croatian, but just the same she was among those wonderful women who set an example for me to follow. I remember her with great fondness.

Back in August of 2010, I was footloose and fancy free for a few days in Houston. I had plans to attend a play at the Alley Theater and besides that I had a little time on my hands. I called Fred and he suggested that I could tour the Holocaust Museum. Fred, Fred Schwartz Zeidman, had been appointed Chairman of the United States Holocaust Commission by President Bush. Fred, I used to call him "Freddy" in school, had done right well for himself. A lot of the gang from High School are gathered together over on Facebook after all these years and we are all very proud of him. You see, we all know that he did not come from wealth and power. Fred earned everything he has by working hard and by working smart.

I went to the museum. The exhibits and tour were out of this world - except, except when it came to South East Europe there were at that time a few items which I saw that could stand some clarification and some more details. When Fred and I met later, I had some suggestions for him about this. He listened carefully, poor guy, for almost three hours, as I told him the story of other Holocausts at Bleiburg, in Vukovar and in Bosnia in the later years of the twentieth century. I told him about the disappearances which affected people even in the diaspora. I told him the truth about my sister Susan. I told him about how I had been rescued by Mrs. Redding's sister. That was a matter which had been handled quietly, efficiently, and firmly with little noise. We understood the cause, but were in wonderment because our family had not been a danger to anyone in hundreds of years. I told him some of the stories of other Slavs, Jews, Roma, Vlachs, and Muslims whom I knew and who had made their way from Croatia to the very area where we had lived as children and who were still coming. I noticed that Fred took notes. 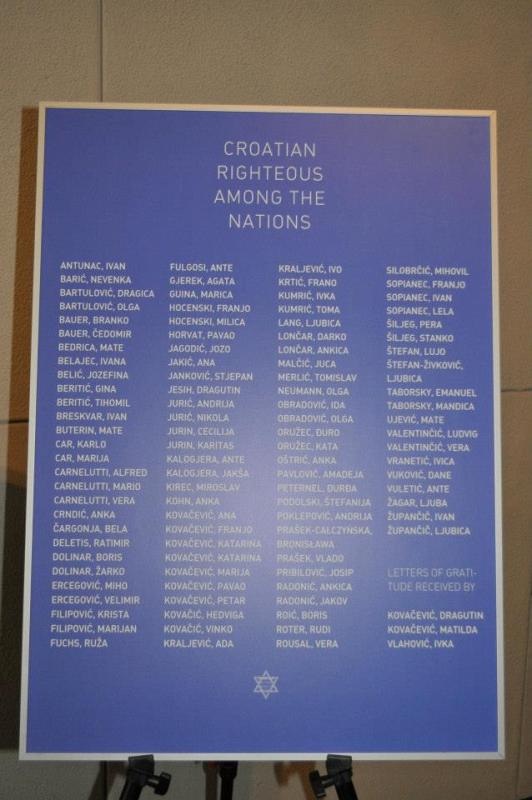 I also noticed over the next few years that the Holocaust Commission had taken an active part in collecting evidence that helped with the trials and convictions of some of the monsters who had killed so many and destroyed the lives of so many many more. No one had to tell me that Fred had something to do with helping bring some justice to bear. I knew. Whether we had ever conversed or not, Fred may have acted. Fred Zeidman always had a deep sense of right and wrong which his parents helped instill in him from his youth.

Still, as I hurtled down the highway with the cruise control set on 75 mph and as I listened to my CDs with Nenad Bach and Maki and Damir Radov and some klapa, I mused about how one Jewish man who was a lifelong friend with a grizzled old Lutheran pastor, who himself was irretrievably connected to a gaggle of Roman Catholics and a gaggle of Muslims who lived in a far away land, had managed to accomplish something for us. There is a God, you know. This is a story which runs directly counter to all the hatred the world wants us to hear. The press seems to want us to hear about Muslims killing Jews and Jews killing Muslims. Whatever there might be to any of those stories, there is also this story.

Fred's flight would not arrive in Houston on Monday until long after the commemoration at the Museum was over so he asked me to deliver his apologies. I did exactly that on Sunday evening when I met Ambassador Joąko Paro at the Houston Croatian Club. It was a jovial setting that evening. We had been feasting on trays of meats and cheeses and homemade goodies the ladies had prepared. There was a bit of wine too. Our Consul from Los Angeles was there. Everyone was talking and having a good time with each other. That did not change when Mr Paro arrived. He fit right into the crowd. 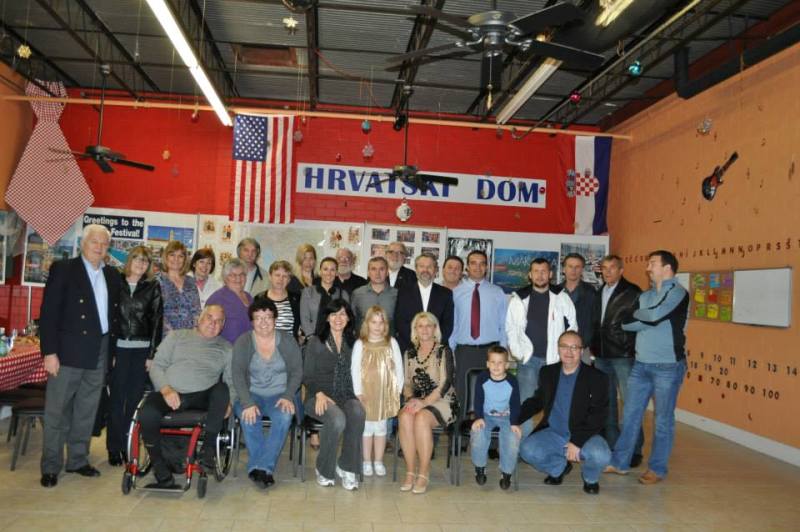 I know he will not ever read this so I can say whatever I want to say about Joąko Paro. I was impressed with the man. Mr Paro is well spoken and a gentleman. I became aware that he does his research too. He even knew about my YouTube channel "Canovals." We had a few moments together where we discussed some issues that might affect someone in the diaspora who wished to return Home. I want to tell you, he was on top of those issues. Not all of these issues are easily solved, but he knows about them and he is working in our behalf. My impression is that the man cares about us out here in Texas. He is not only Ambassador to the US but he is also Ambassador to us. In some way perhaps, he also serves as our Ambassador to the Croatian state. 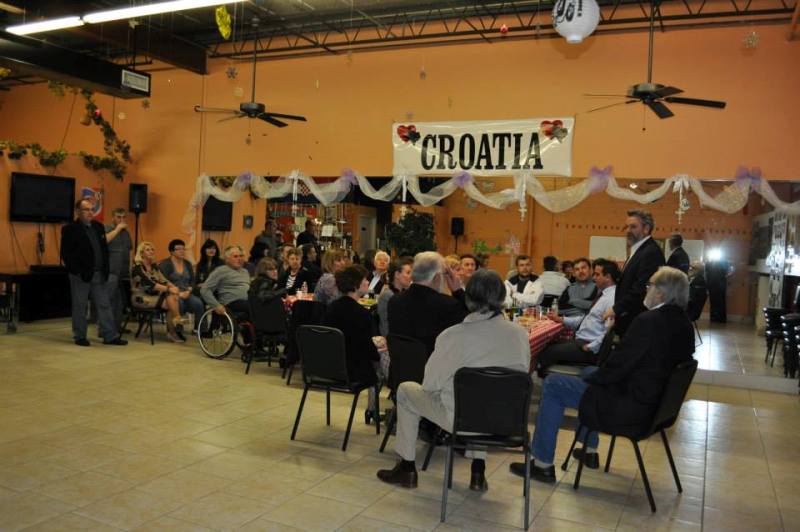 Not everybody remembers anymore that most of us kept fairly quiet about where we were from or where our ancestors were from. First of all, no one much knew what or where was a Croatia. When they heard the word Croatian it sounded sometimes to people like "crustacean" and they would give you the oddest look. When you pointed on a map they would say "Oh! Jugoslavia!" But for some of us, "Jugoslavia" was not part of our history and we did not know really what to think about this "Jugoslavia," either one of them. We were Croatian pure and simple and so we kept our mouths shut.

Some of my friends knew or had experienced what happened in the years after World War II and so we kept our mouths shut in public. Finally, in the 1990's we could lift up our heads again and we began to feel free to identify ourselves. Even then there was sometimes a penalty to pay. I was accused once by a couple of church officials of being a Bosnian terrorist. That accusation of course did not fly but still it was made. A former "friend" told me that all Croatians are dirty people. That ended that friendship fairly fast. I still find people who think Croatia is somewhere close to Chechnya or Kazakhstan.

Some of my Jewish friends knew about the NDH and so Croatia still has had a bad taste in their mouths. For years, I kept my mouth shut around them.

Now, on Monday, the 27th of January 2014, the Jewish community in Houston was acknowledging that some Croatians were "Righteous Among the Nations." This is an important milestone for us.

I was at the Holocaust Museum early, among other things, to make some photographs and to set up to film the proceedings. My reception was warm and enthusiastic. Everyone from the security guard to Mark Mucasey, the Chair of the Holocaust Museum and members of the American Jewish Committee welcomed me and engaged me in conversation. One lady especially comes to mind, Carol Heard, who was amused to find that I knew about Richmond, Texas and all the smaller communities around where she had spent her youth. The Consular party arrived followed shortly by our Ambassador who himself was swiftly swept up in the welcoming greetings.

Soon afterward we all went into the auditorium and the ceremonies proceeded. When it came time for Mr Paro to speak he said "I have to say a couple of things especially for the children and generations to come - Remembrance is important to remind us how evil we can be and how good we can be." He told us a little of the complicated story of his own family in the history. We heard that he was married to an MOT. I didn't know that "MOT" means "Member of the Tribe" until a gentleman who survived the Holocaust in Poland sitting beside me on the back row explained it to me. Mr. Paro made a point to be clear that the current state of Croatia is not an heir of the fascist state but is an heir of the resistance. "There was a snake of evil in the body of the Croatian people. We were able to produce both things and it is still in the Croatian people. We call our selves Croat, we're ugly, can we be proud without remembering the evil we have been able to commit? No!" You can hear his entire speech in the video down below.

After the choir sang a final time, we all processed to the garden past posters commemorating the Croatian "Righteous Among the Nations" and there was a further time of fellowship. The weather forecast was for freezing "winter precipitation" (meaning that "s" word which south Texans simply cannot pronounce) so very soon I was on the highway back to Brownsville. On the way home I felt content. Some Croatian people had been recognized as not so bad after all. Some were even heroes. I had been received with honor and dignity and friendship, and so had my Ambassador and the Consul and Danijela Miąkić and all the other Croatians present. My back hurts like crazy from all the driving but I can hold up high my head now. Yes!!!

There is a lot more work to be done of course. We are not finished. But this was a good and exciting moment in the journey we have before us.

The video is long and prepared in HD1080 so it took a very long time to upload. I managed to record the entire public proceedings of the event.

"It needs to be noted that the numbers of Righteous recognized do not reflect the full extent of help given by non-Jews to Jews during the Holocaust; they are rather based on the material and documentation that was made available to Yad Vashem."

Formatted for CROWN by   Marko Puljic
Distributed by www.Croatia.org This message is intended for Croatian Associations / Institutions and their Friends in Croatia and in the World. The opinions / articles expressed on this list do not reflect personal opinions of the moderator. If the reader of this message is not the intended recipient, please delete or destroy all copies of this communication and please, let us know! Or simply...enjoy and spread the word and good vibrations.