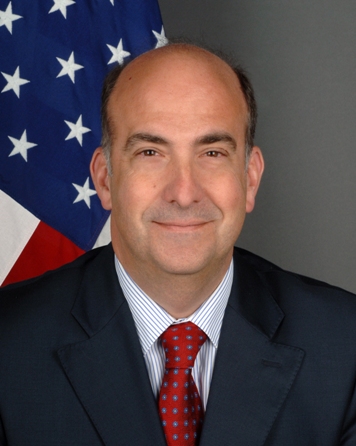 Kenneth Merten, the United States Ambassador to the Republic of Croatia, presented his credentials to President Ivo Josipoviµ on October 30, 2012.

Kenneth Merten is a career member of the senior Foreign Service; he joined the diplomatic corps in 1987 and most recently served as Ambassador to Haiti. He also served as a Deputy Executive Secretary to U.S. Secretary of State Clinton and earlier to U.S. Secretary of State Rice. He was awarded the 2011 Ryan C. Crocker Award for Outstanding Leadership in Expeditionary Diplomacy for his extraordinary leadership in the wake of the 2010 Haiti earthquake.

Ambassador Merten holds a B.A. from Miami University in Ohio, and a Masters in Public Administration from American University. Studies at the UniversitÚ d’Aix-Marseille in France and at Karl Franzens Universitõt in Austria complement his other academic work. He received an honorary Doctorate from Miami University in 2010. In July 2012, Ambassador Merten was decorated by Haiti’s President, Michel Martelly, with the Grande Croix of Honor and Merit, the fourth foreign diplomat to receive that honor in over 200 years of Haiti’s independence.

Ambassador Merten was born in St. Louis, Missouri and considers Hudson, Ohio his hometown. He is married to Susan Greenman Merten and has two children.

Formatted for CROWN by á Marko Puljiµ
Distributed by www.Croatia.orgáThis message is intended for Croatian Associations / Institutions and their Friends in Croatia and in the World. The opinions / articles expressed on this list do not reflect personal opinions of the moderator. If the reader of this message is not the intended recipient, please delete or destroy all copies of this communication and please, let us know! Or simply...enjoy and spread the word and good vibrations.