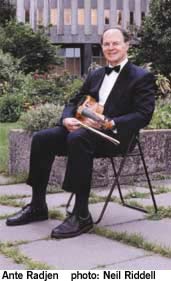 Physicians, medical students and researchers make up half of I Medici di McGill's musicians

It was a Monday night rehearsal, typical in every way except that I Medici di McGill isn't your run-of-the-mill performing orchestra.

Half the musicians are physicians, medical students and researchers, and - as an old joke goes - the rest have seen a doctor at least once.

Practice is held in a lecture hall of the round medical building on Drummond St.

Conductor Iwan Edwards swayed a hand, beckoning the clarinets to soar over the violins and cellos and for the horns to use more oomph: "Punctuate," he urged. "More staccato." He looked to the bass player: "Are you on strike? In time to the music!" Leaning into the string section, he crooned the melody: "Deedle deedleeeee deedleee dum, deedlee dum ... Got it?" The lead viola player was at the edge of his seat, transfixed. That would be neurophysiologist Ante Padjen, the orchestra's founder and most ardent advocate, seated under the conductor's nose.

Padjen became a McGill professor of pharmacology via studies in Scotland and a stint at the National Institutes of Health in Washington.

The non-profit I Medici got off the ground as Padjen's string quartet 30 years ago. "My sanity valve," says Padjen, who officially formed the orchestra in 1989.

Any non-music "happenings" are perks of the trade, Padjen says. During one rehearsal break, he had the flautist (an ophthalmologist) remove a growth from his eyelid.

"I always say that whoever comes to conduct with us will get the best medical care." For the past seven years, Edwards - a noted Canadian conductor - has provided the orchestra with a collection of "Iwanisms," or quotes, now available on the orchestra's website.

For example: "I assume I can use medical terminology with this orchestra: You're vomiting all over the stage." Also: "Your job as medical health professional is to alleviate pain, not to inflict it - try to play in tune." Back at rehearsal, two French horn players read novels during the down time in their parts. A trumpeter has nodded to sleep.

"Give me more clarinet because Phil here is being a little too loud," Edwards said, referring to businessman and former professional cellist Phil Raphals, the featured lead cellist in the troupe's next concert.

Trumpet player Dr. Louis Dagenais of Côte St. Luc hospital, who sat next to the dozing trumpeter, waved an imaginary conductor's baton, his eyes focused on the music.

The stress of his hospital job, he said later, disappears with the music. "Besides, trumpet players like to make a lot of noise." Some orchestra members, like Dagenais, began playing after learning medicine.

Harp player Mary Elizabeth Sutherland had an academic career but couldn't give up music. She's now a graduate student in music cognition.

Back in his native Croatia, Padjen was studying to become a professional violinist, but became sick with tuberculosis.

"A fortunate misfortune," Padjen says. "My magic mountain, so to speak." He spent two years in a sanatorium. Doctors forbade him to touch the violin. But his roommate, who happened to be a doctor also infected with TB, became Padjen's mentor, guiding his interest in music and science.

"I became interested in human destiny," said Padjen, who believes music contains a balance that also applies to science.

Padjen contends that children are hard-wired to learn music as well as language. Medical school applicants should play an instrument as a prerequisite for enrollment, he said, "because music is the great expander." In the interest of linking science and music, I Medici concerts include lectures on the relationship between music and the brain.

The "doctors' orchestra," now in its 19th season, is hardly a first effort for Padjen.

Although on call at a Zagreb University hospital, Padjen had to see "this very special concert." He arranged for hospital staff to call the concert hall guard if he were needed.

Minutes into the show, Padjen was called to the hospital. By the time he returned, the concert hall was a mess and police were called because of the mayhem caused by Cage's performance.

During the 1960s Iron Curtain era, music was an expression of liberty for eastern bloc countries, a space where East and West could meet freely, he said.

Padjen says he prefers classical and jazz to modern. His iPod has a copy of an underground Charlie Parker show from Montreal's Chez Parée in its pre-strip bar days as a nightclub.

But he rarely listens during work hours because music requires attention, he says.

I Medici's next concert will include Elgar's Cello Concerto and Britten's Soirées Musicales.

During rehearsal of the Britten, some loud but errant notes from the horn section earned the group a final Iwanism for that evening: "I appreciate the spirit - not the execution," Edwards said.

But the next take was better, prompting the players to applaud themselves - even before Edwards could say: "Well done." I Medici di McGill will perform March 17 at 8 p.m. at Oscar Peterson Concert Hall, 7141 Sherbrooke St. W. For information, call 514 398-3603 or visit www.imedici.mcgill.ca