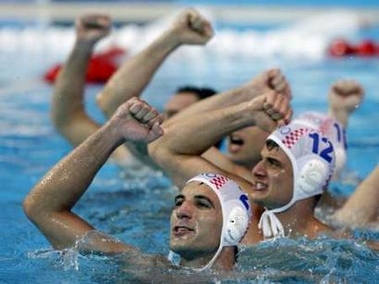 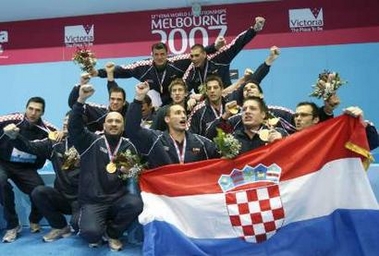 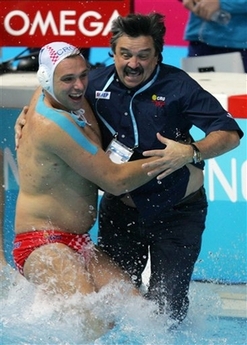 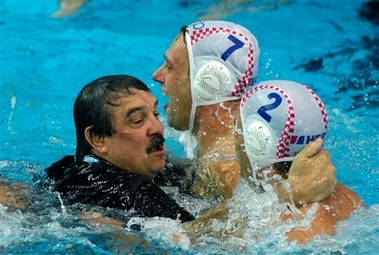 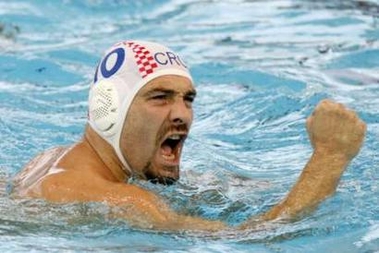 Croatia's water polo team pose for a photo during the medals ceremony after winning the gold medal at the World Aquatics Championships in Melbourne April 1, 2007. REUTERS/Nir Elias (AUSTRALIA)

Croatia's Mile Smodlaka throws coach Radko Rudic into the water as they celebrate their 9-8 win over Hungary in their men's waterpolo final match at the World Swimming Championships in Melbourne, Australia, Sunday April 1, 2007.

Samir Barac of Croatia reacts after scoring a goal during their final match against Hungary at the World Aquatics Championships in Melbourne April 1, 2007. REUTERS/Nir Elias (AUSTRALIA)

Croatia made their first water polo medal in FINA world championship history a golden one, pulling off an upset overtime defeat of Hungary on a dramatic final day of the tournament in Melbourne today.Croatia's Pavo Markovic scored his side's two goals in extra time to seal the 9-8 win and delight a vocal and mostly pro-Croatian crowd, after the score had been 7-7 at the end of regulation time.

But goalkeeper Frano Vican was the true hero, pulling off some stunning saves, including a blinder late in the final term which helped Croatia push the match into extra time. The gold medal play-off was the third match in succession to go into extra time, with the bronze medal play-off and the battle for fifth spot both ending in penalty shoot-outs.

Spain took the bronze medal, prevailing in a marathon penalty shootout against Serbia, after Italy had earlier earned fifth place with their shootout win over Greece. Hungary, a traditional powerhouse of the sport and the winner of the past two Olympic gold medals, had looked to be headed for another gold medal late in the final.

Star player Gergely Kiss put them up 7-5 with a long-range goal with five-and-a-half minutes to play. It was the first time in the match either side had led by more than one goal. Croatia's Teo Dogas quickly replied to again make it a one-goal game, but with two minutes 40 seconds left in the game, Hungary's Marton Szivos looked certain to again give his side a two-goal buffer. A mid-pool turnover allowed him to get free on the fast break, giving him as much time as he liked to take a shot from point-blank range, with only Vican to beat.

A goal would most likely have sealed the game, but Vican produced an incredible reflex save and the ball was rushed to the other end where Croatia's Maro Jokovic scored the goal that sent the match into extra time. Markovic and Kiss each scored in the first period of extra time, before Markovic scored the winner midway through the second period.

Earlier, Spain and Serbia needed 10 penalty shots each to decide the bronze medal, with Spain eventually winning their shootout 9-8.The scores had had been tied 8-8 at the end of regulation time, after Serbia levelled the scores with 3.7 seconds to play.The teams added one goal each in extra time to push the match into penalties.Besides putting Spain on the podium, their third place allowed them to join Croatia and Hungary in gaining automatic qualification for next year's Olympic Games in Beijing.

As I mentioned in editorial CROWN Croatian World Network Newsletter, March 30th, 2007 . "Last minute goal. Finally we are giving goals in the last minutes rather then receiving them. This is a quantum leap for Croatian psyche." And this is twice in a couple of days. We are arriving.