CROWN - Croatian World Network - http://www.croatia.org/crown
In Memoriam: Paul Unger, a great friend of Croatia
http://www.croatia.org/crown/articles/9712/1/In-Memoriam-Paul-Unger-a-great-friend-of-Croatia.html
Frank Mustac
By Frank Mustac
Published on 01/29/2009
A citizen of the world and a bridge linking Croatia and Cleveland
Paul A. Unger, citizen of the world 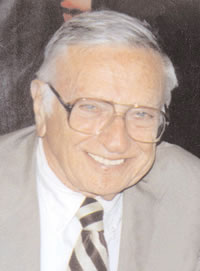 Paul A. Unger's small idea to help his beloved wife's Croatian homeland acquire a better understanding of democracy kept getting bigger until it became a truss on the bridge of people linking Cleveland with the world.

Unger, who died Friday at the age of 94, translated experiences as a U.N. resettlement official during and after World War II into peacetime outreach. His passions and investments helped put Cleveland on the world stage, and vice versa. Head of a family bakery packaging business, he was one of many internationally-minded Clevelanders whose vision spanned oceans.

After Croatia became independent in the 1990s, Unger launched seminars for Croatian political elites at Harvard University and for midlevel functionaries at Cleveland State University. The Unger International Center at CSU continues his idea of outreach with programs in both Croatia and Slovenia, hoping to become a go-to learning center for new democracies.

Unger also endowed the Cleveland in the World forum at the Cleveland City Club, and was a past president of the pioneering Council of International Programs in Cleveland. Unger's many friends in Croatia and Cleveland will be toasting him and his dedication to others. With them, we say, "Zivjeli!"

"I often marveled that somebody who was sort of an overgrown baker had such a wonderful engagement with the rest of the world," Dick Celeste said Monday about a key supporter of his Ohio gubernatorial victories.

"He was always insightful, pressing to make changes," from better food to more foreign speak ers, said Jim Foster, head of the City Club of Cleveland, where Unger founded the Cleveland in the World forum.

Unger died Friday in his Shaker Square home at age 94 from prostate cancer.

As an East Side liberal fluent in Croatian, he helped the Democrats fuse key constituencies. He loved to bring people together from different cultures and countries to share pastries, brandy and plans for a better world.

His pet phrase was "Eatin' is easy."

Unger was born in San Diego but raised in Cleveland and Cleveland Heights. He got a bachelor's degree at Harvard and worked in the New Deal administration, developing recreation programs and promoting early public housing.

During World War II, Unger joined the United Nations Relief and Rehabilitation Administration. He helped evacuate people from North Africa and resettle them in the Balkans, where he fell in love with Sonja Franz, a Croatian architect and engineer designing refugee housing. Her family reopened a Catholic church closed by the Communists to marry them.

Back in the United States with his wife, Unger led the National Urban Rat Control program, keeping the rodents from destroying wheat needed in hungry Europe.

He returned to Cleveland in 1953 to lead the Unger Co., a family bakery packaging business. He helped develop waxed bags, promoted recyclable packages and found new customers in several countries.

Among dozens of civic efforts, Unger helped his wife lead the Neighborhood Centers Association. He also became a national trustee of the English Speaking Union, known for Shakespearean contests.

Unger was a founder and president of the Council of International Programs, a nationwide program based in Cleveland to train foreign professionals. He led several state and federal trade missions and was a delegate for the General Agreement on Tariffs and Trade.

Diplomacy ran in the family. His brother, Leonard, was an ambassador to three countries.

Until about a year ago, Unger remained active, keeping score at Indians games, toasting with Slivovitz before every lunch and dinner, checking out new restaurants and visiting the City Club's third-story quarters weekly by RTA rapid and foot.

In his final week, his attention was unsteady, but he seemed to enjoy a Democratic inauguration.