THE UNIVERSITY SCHOOL OF CROATIAN LANGUAGE AND CULTURE

The University of Zagreb is the oldest university in Croatia. It is one of Europe`s most outstanding universities, well known for its academic expertise and tradition. It was established on September 23, 1669 by Leopold I, the Emperor of the Holy Roman Empire, who declared that the status of University, with all accompanying privileges, be granted to the Jesuit Academy in  the free and royal city of Zagreb. Today the University of Zagreb includes 29 faculties, three art academies and the University Centre for Croatian Studies.

The University School of Croatian Language and Culture is offered to persons of Croatian background, as well as to any students who want to learn (more) about the Croatian language and culture. In addition to the academic program, students visit museums, galleries, theater productions, concerts, see the sights of Zagreb, they meet famous artists and public personalities, take study trips, etc. The cultural program is organised by the Croatian Heritage Foundation and it is relevant to lessons and classwork.

Additional classes (1-2 hours) may be organised in the afternoon. The classes are adjusted to the needs and interests of the participants who choose them according to their teachers' suggestions.

The program is held in the centre of Zagreb, not far from the main city square.

5 academic hours a day/each session 45 min.
25 academic hours a week (M-F) /4 weeks
110 academic hours/exams included
- additional lectures possible
Please be aware that our School's study trips to Croatian Hinterland and the National Park Plitvice Lakes also include Croatian language and culture teaching and learning. As such they make a part of the regular teaching units.

Levels
The Croatian course is offered at three levels (beginner, intermediate and advanced). Each level contains three sublevels (i.e. intermediate 1, 2 and 3, advanced 1, 2 and 3),  except for the beginners level which consists of four sublevels (beginners 1a, 1b, 2 and 3). Since classes are held in small groups (maximum of 12 students per group), the number of the groups depends of the total number of students and their knowledge of Croatian.
Note: Depending on the number of participants and their knowledge, it is possible to organise classes in more groups of the same sublevel. Hence, the number of groups does not necessarily have to be equal to the number of levels.

Classification of students
When the application is processed and the deposit paid, participants receive a questionaire and a short Croatian test via e-mail. Filled-out questionaires and tests should be returned no later than May 20, 2008.

Depending on the test results, a short essay and an interview with the teachers, the appropriate level for each student is determined. Students write an essay and have the interview at their first meeting, on Saturday, June 28, 2008.

Students' obligations
Students are expected to fulfill all classroom tasks (regular attendance, writing homework, working on project tasks) and get books and manuals according to their teachers’ recommendations.

The final exam consists of two parts - written and oral. The written part is scheduled for Thursday, July 24, 2008, and the oral one for Friday, July 25, 2008. Students who pass the exam receive a diploma from the University School of Croatian Language and Culture. They also receive a grade report based on achievement. Students who do not pass all exams are not eligible to receive the diploma. However, as  other students, they receive a certificate of attendance.

Diploma will be delivered in a ceremonial event scheduled for the evening on Friday, July 25, 2008.

CULTURAL PROGRAM
All academic lectures and study visits on Croatian culture & history make a part of the program organised by the Croatian Heritage Foundation.

Participants who want to receive a grade on Croatian culture, sit for the exam. Successful students have their grades included in the certificate of the University of Zagreb.

Attention: The total cost of your stay at the campus should be covered in cash upon arrival. Payment should be made in Croatian currency (kuna) according to the exchange rate valid on the day that the payment is due. It is to be handed to the responsible campus dept.

REGISTRATION
1. All applications should be received by the Croatian Heritage Foundation no later than May 20, 2008, along with a 250 deposit (bank-cheque) which will be partially refunded in case of cancellation before June 13, 2008. The cheque, covering registration and the cultural study program, is to be addressed to:

If it is more convenient, you can  send your deposit via bank.  In that case, please forward it to the following bank:

Attention: Students 17 years age and older can apply. If less than 20 students register, organisers reserve the right to cancellation of the program in which case the total payment  is refunded.

Important dates
All applications & deposits are to be received by the CHF (HMI) no later than May 20, 2008
Questionnaires and tests are to be received by the University of Zagreb no later than May 20, 2008
Other important dates:
First meeting of all participants & officers in charge (orientation & testing of students) - June 28, 2008
Official opening of the school at University of Zagreb - June 30, 2008
Croatian Culture & History exam –
Written exam (Croatian language) - July 24, 2008
Oral exam (Croatian language) + distribution of diplomas - July 25, 2008

THE UNIVERSITY OF ZAGREB

The University School of Croatian Language and Culture
E-mail: croatianlang@unizg.hr


Spend a happy holiday with us in Novi Vinodolski 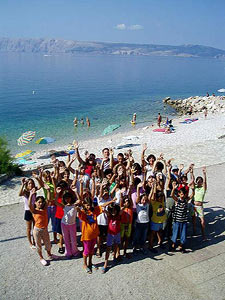 Dear friends!
Did you know that the Croatians invented the necktie?
Do you know any Croatian songs?
Do you know how to make a traditional Christmas decoration or an Easter egg?
Do you know what a "Spomenak" is?

PROGRAM
In the company of children your age and our cheerful trained teachers you will learn or improve your knowledge of Croatian language in our interesting daily workshops. And that's just the beginning! Together we'll embark on a journey through ancient Croatian history, talk to its heroes, stroll through magnificent landscapes nature blessed us with, meet interesting people, learn about the cultural legacy Croatian people have built and guarded for centuries. In our Little School we will try the land and the sea with various sporting and other competitions, and in the evenings we'll have fun dancing, singing and playing games. All this and many, many more happy moments in a safe, healthy and carefree environment supervised by experienced and reliable teachers.

The program is intended for children and teenagers of Croatian descent from around the world as well as for children of other nationalities-the present or future friends of Croatia.

This year's program is created for children aged from 9 - 14 years.

Words alone cannot express the beauty and variety of what we have to offer.

So-come! We are certain that not only will you have a great time, but also make many new friends, future pen-pals from around the world. The gift of friendship is waiting for you.

And our gift to you will be the word and the image of our beautiful homeland.

a) with a check mailed to the following address:

b) via bank payment
to the address:

Please send your applications with a 100 € deposit before June 18, 2008; and the rest of the payment no later than two weeks before beginning of the School.

NOTICE: If we have fewer than 25 applicants,the organizers reserve the right to cancel the program and refund the entire payment.

The place and exact time of departure and return will be announced shortly before the School's beginning.

Information for organized groups
TIME AND PLACE OF ARRIVAL - will be arranged by the Croatian Heritage Foundation and organizers from other countries. Arrival in Zagreb is possible a day earlier. In that case the participants must pay for their accomodation in Zagreb.

GUIDES - we recommend a young, experienced and responsible person who have experience working with children and who are capable of executing part of the planned program.

We suggest that the children bring along:

Formatted for CROWN by Marko Puljiæ
Distributed by www.Croatia.org This message is intended for Croatian Associations / Institutions and their Friends in Croatia and in the World. The opinions / articles expressed on this list do not reflect personal opinions of the moderator. If the reader of this message is not the intended recipient, please delete or destroy all copies of this communication and please, let us know! Or simply...enjoy and spread the word and good vibrations.