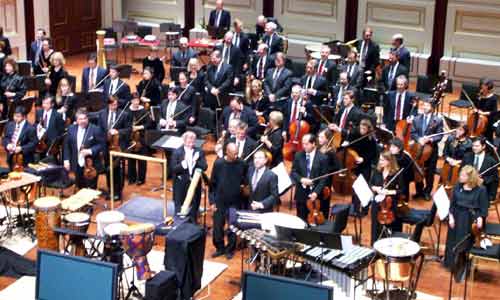 PITTSBURGH (AP) - The Pittsburgh Symphony Orchestra will receive $5.5 million from a charitable foundation to bolster its international tours through 2011.

The symphony will get $1 million a year from the Henry L. Hillman Foundation, which also will contribute an additional $500,000 to supplement the orchestra's endowment income.

Hillman, who called himself "a one-man chamber of commerce" for the city, said he was glad to support the orchestra because the foreign tours advertise Pittsburgh.

"It's the only exportable cultural asset we have," said Hillman, who attended Thursday's announcement with his wife, Elsie.

The first tour to benefit from the funding begins next month in Pamplona, Spain.

That tour commemorates the 250th anniversary of the naming of Pittsburgh. The symphony will perform in 13 cities in Spain, the Netherlands, Germany, Austria, Hungary and Croatia over three weeks.

"It takes a lot of things to make an orchestra world-class and remain world-class," Pittsburgh Symphony board chairman Richard P. Simmons said. "It takes the support of Pittsburghers like Henry and Elsie."

Board member Marjorie Larouere said she hopes the Hillmans' gift "encourages others to take the pride this couple has" to support the international tours.

The orchestra has been touring internationally since 1947.

The money also will support the orchestra's ongoing $80 million fundraising campaign built around a $29.5 million gift - the largest the orchestra ever received - last year from Simmons.