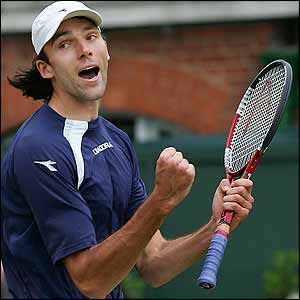 The Croatian number two counted on 25 aces to overcome Australia's Hewitt, and in-so-doing became only the fourth player to hit 1,000 aces in one season since the ATP starting measuring the statistic in 1991.

Hewitt said of his defeat: "It's tough to say... because actually I was the one who had break points, four break points, in the match and I didn't fight against a break point on my serve the whole match."

"I felt like I was better for the whole match. And I lost the match."

Karlovic will next face David Ferrer in the semi-finals after the top seeded Spaniard eased past compatriot Feliciano Lopez 6-4 6-4 in just 80 minutes.

The 25-year-old Ferrer, who reached the last four of the US Open last month, is chasing his third title of the year after reaching his fifth semi-final of 2007.

Ferrer, sixth in the ATP race and eighth in the ATP rankings, is also attempting to close out on another one of eight places in the season-ending Maters Cup.

French number one Richard Gasquet also reached the semi-finals with a comfortable 6-4 6-1 victory over Israeli number one Dudi Sela.

Gasquet will next face Czech number one Tomas Berdych who was made to fight to beat Spaniard Fernando Verdasco 7-6 (7) 4-6 7-5.