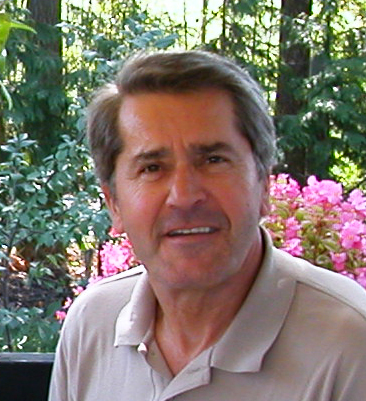 Rudolf Arapović of blessed memory died on August 3, 2007.  He was an active parishioner of the Croatian Catholic Mission of St. Blaise in Washington, D.C., from its founding until his return to Croatia in 1997. The funeral was held on August 6, 2007 in Otruąevac, outside of Samobor.  Fra Vjekoslav Lasić spoke about Rudolf's devoted efforts to bring about the Croatian state, Rudolf's collaboration with the martyred Bruno Buąić, and his own collaboration with Rudolf. Fra Nediljko Knezović spoke of Rudolf's donation of 10,000 euros worth of books to the Church of Croatian Martyrs in Udbina.

Below is the eulogy delivered by Anđelko Mijatović in the original Croatian and an English translation, for publication in the Croatian World Network Newsletter

The inescapable death of our dear Rudolf Arapović - husband, father, brother, cousin and friend to those assembled here and many others throughout Croatia and the world, a Croatian patriot, political exile, distinguished political emigrant, writer and publicist - and this moment, as we accompany his earthly remains to their eternal repose, provide the occasion to say something about his life and work, his impact and significance.  He was born on December 8, 1937, in Busovača, central Bosnia, into a large family which was persecuted by the communist authorities. His Croatian Catholic family background and milieu marked his destiny. As a young child in 1945, he and his family were sent on a forced march, referred to as a "death march" because many did not survive.  Most of his family was persecuted under the communist authorities. On account of his brother, Pero, a member of HOS (the Croatian Armed Forces, which continued to offer resistance even after the war), Rudolf, together with his family, spent three years under internment and persecution in Zavidovići.

He attended elementary school in Zavidovići and his native Busovača. He completed the classical-program secondary school at the Franciscan seminary in Visoko from 1955 to 1959.  After two years of compulsory military service in čuprija and Kragujevac, from 1961 to 1962 Rudolf completed the state secondary school in Travnik and Zagreb. From 1962 to 1965, he studied philosophy and German at the School of Liberal Arts, University of Zagreb.  As evident from available documentation, the infamous Yugoslav secret police, UDBA, kept tabs on him starting from the 1950s, when he was a secondary school student in Visoko, and especially after August 1964. When anti-Yugoslavia flyers were distributed in Zagreb in 1965, Rudolf, then a third-year student, together with several colleagues and friends, was arrested on June 7. Following a detailed, exhaustive and for many a very difficult investigation, on March 25, 1966 at the Circuit Court in Zagreb, Rudolf,  together with five colleagues and friends, was sentenced to a year in prison for reading the emigrant press and distributing it to others. This sentence was served in Zagreb.

Four and a half months after leaving prison, on October 25, 1966, he escaped to Austria, together with his friend and former fellow inmate, Bruno Buąić. Rudolf continued his studies at the University of Vienna and became involved in the prohibited political activity among the local Croatian emigrants.  When the Declaration on the Position and Name of the Croatian Literary Language was published in the Zagreb Telegram on March 17, 1967, Rudolf translated it into German and sent the translation to the media and diplomatic missions in Vienna. In April 1967, together with friends he inaugurated the Bilten hrvatskih socijalista (Bulletin of Croatian Socialists), in which he wrote articles that were critical of the communist system in Yugoslavia. Rudolf was also followed by the UDBA agents in Vienna, with the code names of "Boąko," "Putnik," "Branko," "Krpan," "Marjan," "Marko" and others. From late June to October 1968, he harvested tobacco with Austrian and German students in Canada, as well as engaging in other activities.  He described his stay in Canada and the life of the Croatians living there when he returned to Vienna in an article entitled Amerika ili čemerika (America or Despair), published in the Bilten hrvatskih socijalista. On June 24, 1969, after over two and a half years in Vienna, he moved to Washington, D.C., where he lived until returning to Croatia in 1997. Rudolf completed studies in computer science (programming) at the Graduate School, USDA, in Washington, D.C. In November 1971, he inaugurated the monthly Hrvatska borba (Croatian Struggle), which he edited and published until 1979 and again in 1991.  After Bruno Buąić was murdered in 1978, Rudolf continued to edit Hrvatski list from 1979 to 1984.  In addition, Rudolf also wrote anti-Yugoslav articles for a number of emigrant publications, including Republika Hrvatska, Hrvatski put, Hrvatska drľava, HT Danica, Zajedničar, Pregled and Hrvatska sloboda, and also contributed to the Washington Post and Washington Times. The list of his publications is extensive. Upon returning to Croatia in 1997, he became involved in public life and continued to publish his articles, reviews and opinions on historical and current events in the press and electronic media, right up to the time of his death.

In the year 2003, he published two books, Bruno Buąić. Meteorski bljesak na hrvatskom obzorju (Bruno Buąić, Meteoric Brilliance on the Croatian Horizon) and DL 229503. UDB-a i njeni suradnici prema tajnim izvjeątajima (DL 229503, UDBA and Its Collaborators according to Secret Reports), which refers to Rudolf's activities between 1964 and 1977. Arapović's HB PRESS also published books by other authors:  Ante Ciliga, Sve i odmah (Everything and Immediately), Zagreb, 1998, and nearly all the texts by Vjekoslav Vrančić in two volumes: Branili smo drľavu (We Defended the Country), Zagreb, 2006, and U sluľbi domovine (In the Service of the Homeland), Zagreb, 2007, which provide highly objective testimony on the wartime events in Croatia between 1941 and 1945. We can say that all of this, as well as the publication of his other texts, is of lasting value and high intellectual quality, especially the polemics. Rudolf and his friends also participated in other patriotic and nation-building programs, which cannot be presented here for lack of time.

Our dear Rudolf wrestled very patiently for three years with a malignant disease, with the very devoted care of his wife, Marija, and many friends, all of whom were convinced that he would conquer it. Only he and Marija knew what he endured. Rudolf did not complain about his illness. Even as he approached death, he did not abandon his disciplined work or his computer, via which he communicated with friends, the electronic media and the world.

Rudolf Arapović died in the arms of his wife, Marija, at 7:10 a.m. on Friday, August 3, 2007, at his home in nearby Savrąćak.  It is impossible describe the emptiness that his passing has left among us all. An exhaustive assessment of our dear Rudolf's life cannot be made in such a short time. He always retained his integrity and uncompromising views, for which he was victimized under the regime of the totalitarian Greater Serbian communist Yugoslavia. He always gave the maximum. As a student, he was always among the best. He mainly acted alone, printing and publishing himself, or prepared mailings with the assistance of his wife, Marija, and his son, Goran. He did not concern himself with material gain and Marija frequently covered expenses. Although he was devoted to the creation of a Croatian nation throughout his life, he never joined or committed himself to political party. He belonged to Croatia with his whole being. His overall opus reinvigorated emigrant revolutionary activity and had a particularly strong impact upon the young generation. He is to be counted among the most worthy of the Croatian emigrants from the 1970s and 1980s.

And now, when we must bid farewell to you on these beautiful Samobor-®umberak hills, what should we say to you, our dear Rudolf? Rest in peace in our beloved and beautiful land of Croatia, for which you fought with your whole being. All of us, your wife, Marija, and son, Goran, your brothers and other relatives, your fellow combatants, friends and admirers from Australia to Sweden and America who are assembled around your coffin and those who could not be here for objective reasons, are grateful and proud to have been with you briefly on this earthly journey. Although you will continue to be in our thoughts and hearts, we shall still miss you very much! May God grant you eternal rest!