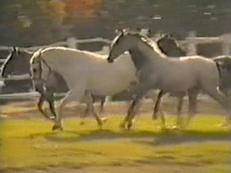 In October 1991, the largest Lipizzaner horse-farm in Croatia, situated near the town of Lipik, was bombed with napalm bombs. Out of 117 horses 27 of them were killed, and more than 80 taken away to Serbia, where they are also today. Believe it or not, the Serbs are trying to SELL stolen Croatian Lipizzaners to Croatia! From reliable sources we know that some of them have been already sold in Italy.

The Lipizzaner horse-farm, which exists since 1905, is known in Europe for its high quality sports horses. They lived in the stable that was 169 m long, 10 m large, with walls 1m thick, providing excellent conditions for healthy life of horses, including wonderful surrounding meadows and forests.

As a result of attack with napalm bombs in 1991, the stable was left in a very difficult condition. The wish of citizens of Lipik is to renew the horse-farm through foreign concessions. Very cultivated space and pleasant climate are ideal for Lipizzaner breeding.

The Republic of Croatia is a member of the Lipizzan International Federation (LIF).

A herd of famous Lipizzaner horses rescued (op-ed: rescued?) during the war in the former Yugoslavia in 1991 has found itself at the centre of a new Serbo-Croatian dispute (op-ed: there is no dispute. The horses are stolen) after animal rights groups claimed they were victims of starvation and neglect. More than 80 grey horses were moved from Lipik in Croatia to Novi Sad in northern Serbia to protect them from the war (op-ed: Protect them?, from whom? and if so, war ended, long time ago. "Protected" reads - STOLEN. There are no two ways around it). But there has wrangling between the two countries over who owns the horses and who pays for their care. (op-ed: This is how manipulation starts. They write as there is wrangling. There is no wrangling and we know who owns the horses. These were, are, and will be, Croatian horses.) That has erupted into open sniping this week when animal protection groups in both countries said most of the Lipizzaners were sick or close to dying. The horses were unfed, neglected, and some had open wounds, one report said. The powerful animals, who are born black and later obtain their famous grey colour, are well known for their elegant strutting and dancing.

They were the pride of the Austro-Hungarian empire and were made famous by Austria's Spanish Riding School. Yesterday, the Serbian Agriculture Minister Slobodan Milosavljevic visited the farm, which lies about 45 miles north of Belgrade, to investigate for himself.

"I am no expert (op-ed: So bring one. ..what a farce) to judge their condition but they seem in decent state," he told reporters. Vets accompanying the minister examined the animals and said all were healthy. But they did leave around 20 tonnes of food, medicines, vitamins and other supplies at the farm for the horses. And there were doubts about what the delegation actually saw. Neighbours told reporters that the visit was a farce. "For years, we looked at horses whose skeletons protrude through their skin," said one neighbour, who did not want to give their name. "They roam around, outside the farm, and eat anything they find - dry grass, maybe even garbage." A spokesman for Croatia's agriculture ministry said that Serbia was due to return the horses to Croatia, "like it should return everything that was stolen from Croatia during the war". But Serbia insists that the horses cannot leave until Croatia settles its accounts. The owner of the farm wants $300,000 (Eu 200,000) in compensation for the cost of looking after the horses. (op-ed: They break into your house, steal everything, drink your coffee while doing it and later, they ask you to pay for the sugar, that they could not find, cause they were too busy stealing. That is an equivalent.)

Mr Milosavljevic said he would soon meet his Croatian counterpart to try to resolve the stand-off. "We have to determine how they came here, how they were kept, what their present condition is and what should be done to solve the problem," he said. (op-ed: Where they came from? They have to establish that? Give me a fu...ng break. What an arrogance. If I were in power, visas would be stoped till the horses came back home and the War Reparations start pouring)

Croatia should step up to the plate and get the horses back immediately.