Blanka is the Best 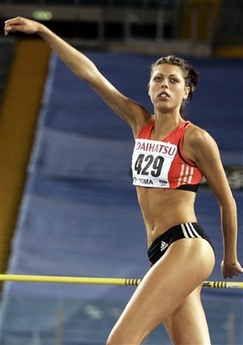 
MADRID, Spain (AP) - Croatia's Blanka Vlasic won the women's high jump with a season-best leap of six feet, 8" inches at the Madrid Grand Prix on Saturday.Vlasic tried to break Stefka Kostadinova's 20-year-old world record of 6-10Ľ with three attempts, but couldn't clear the bar as easily as the one try needed earlier, which eclipsed the 6-8Ľ she achieved at the Asian Games at Doha, Qatar, in May. The world indoor silver medallist, who has failed to clear 6-6" only twice in 10 meets this season, beat Ruth Beitia of Spain and world champion Kajsa Bergqvist of Sweden, who finished 2-3 with 6-4".
American sprinter Rachelle Smith edged countrywoman Lauryn Williams to take the women's 200 in 23.12 seconds. Williams, the world 100 champion, crossed in 23.14 in a steady headwind that kept track times low through the evening. European champion Francis Obikwelu took the men's 100 in 10.38, beating Australia's Joshua Ross, who finished second in 10.42, though this time in no wind. Maria Mutola of Mozambique received the loudest cheers of the night as she overtook the pack and rounded the final bend clear to take the women's 800 in one minute, 58.80 seconds. Hasna Benhassi of Morocco was second. Australian sprinter Jhon Steffensen edged U.S. champion Angelo Taylor in the men's 400. Both sprinters finished with the identical time of  45.05, but Steffensen won by a nose. Jamaica's Michael Blackwood was third. Ron Bramlett led an American sweep in the 110 hurdles, edging David Oliver and Aries Merritt with a time of 13.44. In the men's 800, Youssef Saad Kamel of Bahrain surged through the pack at the final turn to finish in 1:44.49. U.S. sprinter Khadevis Robinson finished ahead of countryman Nicky Symmonds for second. Iyan Heshko took the men's 1,500 in 3:37.54 after overtaking runner-up Dahame Najen Bashir of Qatar. Russia's Olesya Chumakova took the women's 1,500 with a time of 4:06.89, nearly one-tenth of a second faster than Morocco's Ibhissam Lakhoud. Kenya's Julius Nyamu won the men's 3,000 steeplechase in 8:23.81. Tatiana Lebedeva of Russia won the women's long jump with a leap of 23 feet, 5˝ inches, while Nelson Evora of Portugal won the men's triple jump. Netherlands' Rutger Smith won his second shot put of the season, edging Reese Hoffa of the U.S. with a toss of 69-3˝. Lithuania's Virgilius Alekna threw 225-6 to take the men's discus. Nikola Brejchova of the Czech Republic took the women's javelin.

Vlasic and Lebedeva shine in Madrid Grand Prix
By Simon Baskett
MADRID, July 21 (Reuters) - Croatia's Blanka Vlasic beat her own leading mark of the year when she cleared 2.05 metres to take victory in the women's high jump at the IAAF Grand Prix in Madrid on Saturday. The 23-year-old had room to spare as she sailed over the bar at the first attempt and went close as she tried for a world record of 2.10.
World champion Kasja Bergvist of Sweden and Spain's Ruth Beitia tied for second place with clearances of 1.95. There was another top class performance in the women's long jump with Russian Olympic champion Tatyana Lebedeva celebrating her 31st birthday with a leap of 7.15 metres, the second best mark in the world this year. Portugal's Naide Gomes also broke the seven metre barrier to finish second with a personal best mark of 7.01. The evergreen Maria Mutola of Mozambique was one of three women to dip under two minutes as she breezed to victory in the 800 metres. The 34-year-old three times world champion turned on the power down the home straight to ease past Moroccan world and Olympic silver medallist Hasna Benhassi and post a time of 1:58.80.
FINAL LEAP
The stand-out performances in the men's events came from Portugal's Nelson Evora in the men's triple jump and Youssef Saad Kamel of Bahrain in the 800 metres. The 23-year-old Evora set a national record and the fifth best mark in the world this year with his final leap of 17.51 metres. Kenyan-born Saad Kamel also looked in good shape when he eased to victory in the 800m with a season's best time of one minute 44.49. Dutchman Rutger Smith won a high-profile shot put featuring the top-five ranked men this season. Smith launched the put to a season's best 21.12 metres with his first effort to claim an emphatic victory over Reese Hoffa of the United States (20.81) and Dane Joachim Olsen (20.64). Lithuania's Virgilijus Alekna deprived the home crowd of something to celebrate when he overhauled local favourite Mario Pestano to win the men's discus with a throw of 68.74. Kenya's Julius Nyamu ended the night on a high when he set a meeting record of eight minutes 23.81 as he cruised to victory in the men's 3000 metre steeplechase.