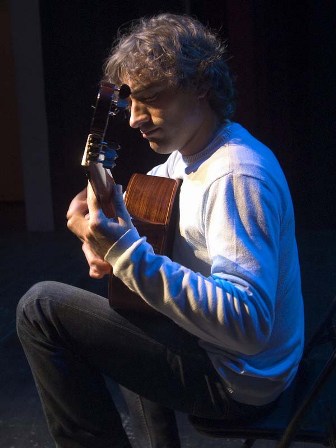 Viktor Vidovic was born in 1973 in Karlovac, Croatia. He comes from a well-known musical family, whose influence on his achievements already at his early age was very big. At 12, he had his first solo concert. At 13, he took very convincing first places at competitions in Croatia and the former Yugoslavia, coming far in front of rivals the generations above him. At 14 he enrolled in the Geneva Conservatory, in the class of Brazilian guitarist Maria Livia Sao Marcos, under whose guidance he took the first place at CIEM, the International Competition of Musical Artists in Geneva, becoming the youngest winner in the history of the competition, taking the Villa Lobos Prize and the Patek Philippe Prize for distinguished musical interpretation. Critics and audiences alike were unanimous in appraising his talent: "This young guitarist has astonished the whole world" (M.L.T., Tribune de Geneve); "His playing was delightful, he is so skilled on his six strings" (A. Peyregne, Actualite Monaco); "He is simply a great and genuine musician" (P.H., Journal de Jura) who "enchanted with his exceptional maturity" and "with pride and certainty promises a brilliant career" (M.L.T., Tribune de Geneve).

He completed his studies at Geneva Conservatory at 16 with a diploma and "the first prize for virtuosity" by way of special recognition. He enrolled in the course at Salzburg's Mozarteum in the class of professor Matthias Seidel, completing the course at the age of 21 with the degree of Master of Arts. For his special artistic achievements and his success during his studies he was awarded  the Franz Kossak Prize and a prize of the Austrian Ministry of Culture. "This great school left a deep mark" (S. Raca, Hrvatsko slovo), but it did not inhibit any of the originality of his performances, which is borne out by the special prize for the interpretation of contemporary music won at the International Music Competition in Templin. At the beginning of the nineties he honed his talent and broadened his artistic experience attending the master classes of Leo Brouwer, Eliot Fisk, David Tannenbaum and other great artists.  As a finalist at the Rene Bartoli competition in France in 2000 he was awarded a special audience prize.

He became vigorously involved in the study of composition, creating original composition and transcriptions for the  classical guitar. Dedicated to the composition and to further musical education, he widened his musical horizons from classical music to kindred orientation, vigorously exploring jazz, latino and original ethno music of various cultures.

He gave a number of extremely well received concerts in the top concert halls all around Europe (in Italy, Germany, France, Spain, Portugal, Belgium, Russia, Austria, Hungary, Macedonia, Slovenia, Holland and elsewhere). As a soloist he gave a number of concerts accompanied with eminent orchestras, among which are Zagreb soloists, the Zagreb philharmonic orchestra, the Orchestra of Roman Switzerland and Stuttgart philharmonic orchestra.

He is a freelance artist and besides his concert activities there are also numerous masterclasses held by him. The masterclass at Medulin, Istria takes place regularly every year, in June.