If the global warming continues, Croatians will die of hunger and thirst by the end of the century. 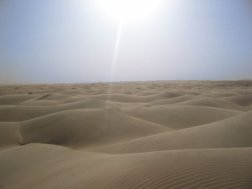 The heat waves that occur several times a year and the deathly hot days will become a usual occurrence in the entire Mediterranean including Croatia in a few decades, American, Italian and Chinese scientists concluded.

According to research, global warming will dry out the Plitvice Lakes and the melting of the polar caps will sink Greek and Dalmatian islands. Despite the heightened sea level, the Adriatic coast will turn into a desert by the centurys end due to an inflow of salt water.

Exchange of droughts and floods

The emission of greenhouse gasses that heat up the atmosphere will be felt in the Mediterranean the earliest, which will become a dangerously hot location with less humidity.

And it will become even worse - when it rains it will rain a lot, for days on end. There will be a threat of floods. When it will be hot, we will have heat waves, claims Italian scientist Filipo Giorgi, whose theories were confirmed by a supercomputer in Beijing. Giorgi and his colleagues, Dr. Noah Diffenbaugh and Jeremy Pal told the Globus daily that not all was lost. By decreasing the emission of greenhouse gasses, the dangerously hot days could become half as tolerable.

If the trends of industrialisation and growth of the population continue, because of an exchange of climate, the Mediterranean will lose its two most important sources of income - tourism and agriculture. Due to the increase in temperatures, Croatia and other Mediterranean countries are facing string winds, but also tornados and hurricanes. Hurricanes such as Katrina that destroyed New Orleans will appear on the Adriatic coast.

All towns at low heights will have the fate of Venice, Jeremy Pal warns. Such climatic changes will influence all the affected countries and their health profile and migrations.

The Adriatic will rise by a metre, which, with the high temperatures, will turn it into a warm sea in which southern species of fish will settle. Proof of this change already exists because in the past ten years 31 new sea species have been registered in the Adriatic that usually lives near African coasts.

When African and Asian countries reach todays industrial standards the climate damage will be irreparable, the three scientists believe, warning that it was difficult to expect of politicians to make unpopular decisions that would bring concrete benefits in 70 years.

Still the predictions leave no room for dilemmas about the rise in temperature which, as all computer models have shown, will rise from one to seven degrees in the next 100 years. In the past century the temperature rose by 0.4 to 0.8 degrees, and already this is alarming. An increase of seven degrees would be a disaster. Just for comparison, the average temperature during the ice age was only four degrees lower than todays.

Apart from the intolerable heat and drought, such a temperature will also bring about forest fires, the movement of the vegetation north and a loss in farming land.

Snow will no longer fall in Croatia, Italy and France and 38 percent of the population of the Mediterranean will lose drinkable water. If the temperature rises by only three degrees, by 2071 87,000 more people will be dying from seasonal heat than today.

These estimates were made on the basis of todays trends, but if a policy is agreed on on the global level to decrease the heating up of the planet, which is very realistic, the situation could change. Still, the alternatives are not popular because nuclear energy which is the only one useful for "cooling" the atmosphere is followed by great controversies.

Wine growers will have the most short-period benefits from the climatic changes because global warming is advantageous for the growth of vines. Of course, with all the catastrophic climate changes, soon both wine and wine growers will perish.

Scandinavian countries will become tourist destinations because only in those, traditionally cold areas, the temperature will be bearable enough for summer vacations. Also, less people will die of cold and an increasing number of plants that traditionally grow in southern regions will grow in this region.