CROWN - Croatian World Network - http://www.croatia.org/crown
Mo Sacirbey: A Convenient Genocide, in a fishbowl
http://www.croatia.org/crown/articles/9118/1/Mo-Sacirbey-A-Convenient-Genocide-in-a-fishbowl.html
Ambassador Muhamed Sacirbey
By Ambassador Muhamed Sacirbey
Published on 07/4/2007
By preaching to the victims, they will then avoid accountability

A Convenient Genocide, in a fishbowl 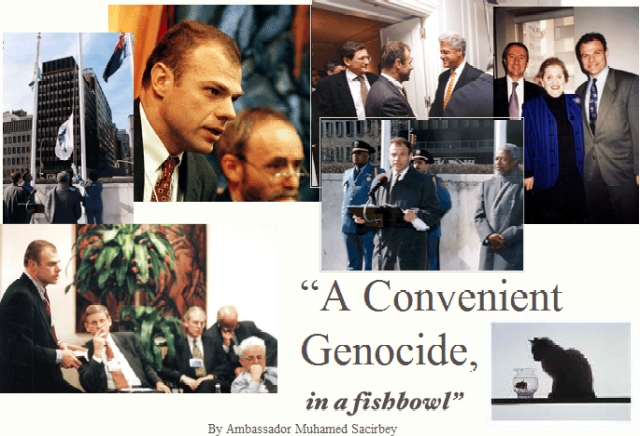 Apology Only to the Victims

They preach but do not confess.
They demand forgetfulness but ask for no forgiveness.
Perhaps they believe that by preaching to the victims, they will then avoid accountability for their own failings.
Their sermons cannot go unchallenged.
These are efforts at rewriting history, and also a tactic to evade their own responsibility for the betrayal of Srebrenica, Zepa and, indeed, all of Bosnia & Herzegovina.

"July 4th" is also my holiday. It is not a coincidental date to begin this publication. Seven days after celebrating my American identity and principles that set the United States as a model, on July 11, 1995 Srebrenica became the last victim in a genocidal campaign committed under the watch of Europe and the United States, and during my tenure as Foreign Minister of the Republic of Bosnia & Herzegovina. There is the connected history of the betrayed and the betrayers. I have to admit that I too was overcome by disillusion.  It was not the shared values though but rather individuals that disappointed. Now we must also look to the common future based upon the principles of the American Declaration of Independence and Constitution, the European Convention on Human Rights, of democracy, an open society and the equality of all human beings. I believe in America and Bosnia & Herzegovina's shared future, "indivisible, with liberty and justice for all." Those of us thrust into piloting Bosnia & Herzegovina's past must claim the responsibility of documenting its history, the charts that will aid in defining a new common course.

"A Convenient Genocide, in a fishbowl" we published in installments first here. Because there still is no closure to this story, the web has immediacy. The Bosnia-Herzegovina American Community of Chicago  has offered to sponsor this Forward, "Apology Only to the Victims," as well as to support the web publication of this project. This is a mutual commitment to document the historical record of Bosnia & Herzegovina.  Thank you. Proceeds from the publication of "A Convenient Genocide, in a fishbowl" are dedicated to confronting genocide and remedying its consequences.

All content is at the discretion and the sole responsibility of the author.