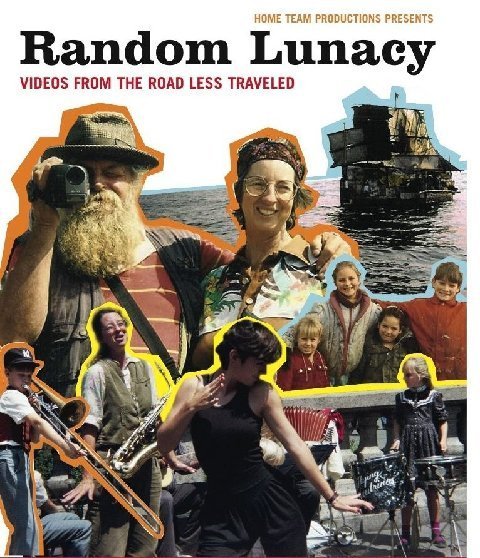 CAPSULE SYNOPSIS
"This guy makes Jack Kerouac look like he lived at home with his mother and went out on the road on weekends." - Alec Wilkinson, THE

HAPPIEST MAN IN THE WORLD
All happy families are not alike, as proven by the radically itinerant Poppa Neutrino, and his family band of self-taught Dixieland musicians.† RANDOM LUNACY, directed by Vic Zimet and Stephanie Silber, follows THE FLYING NEUTRINOS as Poppa leads the family on a quest for pure freedom. They were homeless by choice, and for twenty years† yhey documented their lives with an old HI-8 camera, capturing adventures that ranged from a stint in a Mexican circus to pitting a scrap raft against the Atlantic Ocean. Their greatest achievement - creating for themselves an alternate universe with a value system all its own. Down and out never looked so rich.

SYNOPSIS
Mainstream America might regard the family group of buskers who called themselves 'The Flying Neutrinos' as homeless. But they thought of themselves as sans domicile fixe, or homeless by choice; their name itself was taken from the scientific term for sub-atomic particles in constant motion. Poppa Neutrino, the family patriarch, believes that 'rent is the thing that beats us.' His quest was about pure freedom for himself, wife Betsy, and the five children they raised on the road. His philosophy is based on the notion of nurturing a triad of heart's desires; if you dream them, you can have them. The family taught themselves how to play Dixieland jazz, and managed to eke out a living playing on the streets as they roamed the world from Mexico to Moscow. They slept in cars, old trucks, on empty† beaches. Adventures included a stint with a Mexican circus, and with an ingenuity bordering on genius, building rafts from scraps of junk that they then would live aboard. For twenty years, the family documented itself with an old HI-8 camera, capturing an astonishingly intimate portrait of survival outside of conventional society, in a self-created alternate universe with a value system all its own. At times, a life on the road felt like boot camp for the children. In a story that plays like a nonfiction version of The Great Santini meets Mosquito Coast, tellingly revealed family dynamics run from charged to tender. And, on the streets, safety was always an issue. The basics of survival informed everyday life, and the lessons were severe. But as a result, the kids developed extraordinary self-reliance, a process we follow as the film charts them into their adulthoods; how their respective lives have evolved is an eye-opener. As Betsy Terrell tells it, "some people are nomadic by nature." This was the spirit that inspired the mounting of a daring 1998 expedition into the North Atlantic aboard one of their homemade vessels with a crew of only four. The voyage was captured on video; the tears, the scares, the ineffable beauty, the moments of great joy. In 2004, Poppa dreamed up an innovative football play, which he saw take shape on the field of play because his only taker, a high school coach on a Navajo reservation, believes wholeheartedly that "it might change football." Here the story ends, but only on the screen. At 74, Poppa Neutrino remains a man who feels no one else in the world could be as lucky as he is, owning as he does absolute self-determination. Currently, Poppa Neutrino continues to film his travels, even as he plans more possibilities for adventure.

RANDOM LUNACY casts a searching gaze on what it means to be marginalized in our society, while at the same time examining what our choices have to do with our ultimate freedom, and most importantly, what has genuine value in a culture jaded by its own affluence. This singular family story will resonate with anyone who dares to dream of a life lived free.

Formatted for CROWN by † Marko Puljiś
Distributed by www.Croatia.org†This message is intended for Croatian Associations / Institutions and their Friends in Croatia and in the World. The opinions / articles expressed on this list do not reflect personal opinions of the moderator. If the reader of this message is not the intended recipient, please delete or destroy all copies of this communication and please, let us know! Or simply...enjoy and spread the word and good vibrations.