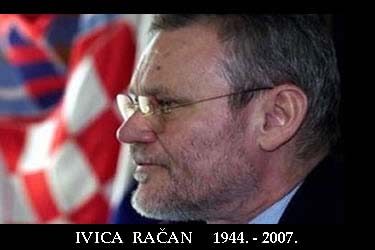 29 April 2007, 12:00 CET
(ZAGREB) - Croatia's former premier Ivica Racan, who has died of cancer on Sunday, was a moderate and tolerant politician who brought the country closer to the European Union ending its international isolation. Former Marxist, who had been at the helm of the Social Democratic Party (SDP) since it was formed ahead of the break-up of the former Yugoslavia in the 1990s, will be also remembered as a true democrat who allowed a peaceful transition from communism. His coalition government, in power between 2000 and 2003, is credited with ending Croatia's international isolation after years of autocratic rule by the late president Franjo Tudjman, who died in 1999.

Zagreb then took the first steps towards fully fledged membership in the EU, which the current conservative government continued with opening of negotiations in 2005. Racan is also highly respected as one of the rare politicians in the Balkans whose long political career was not marred by any corruption scandal.

He was born in February 1944 in the German town of Ebersbach, in a labour camp where the family had been deported. His father had been killed, but a German family saved his pregnant mother's life. Racan joined the Communist Party at the age of 16. After studying law at Zagreb University he embarked on a political career in 1974 when he was elected to the presidency of the Croatian Communist Party Central Committee. From 1986 to 1989 he was a member of the presidency of the Central Committee of the Communist Party of Yugoslavia. He was among the first, along with party members from Slovenia, to move towards political pluralism.

Seen as a figure of reason and tolerance, Racan headed the Croatian delegation at the January 1990 Yugoslav Communist Party Congress in Belgrade where it, along with the Slovenes, refused to bow to the then Serbian party leader, Slobodan Milosevic. The Croatian delegation walked out, heralding the break-up of Yugoslavia. After Croatia's first post-communist elections in April and May 1990, Racan accepted a peaceful transfer of power to the Croatian Democratic Union, headed by Tudjman, and withdrew into opposition. During its 10 years in opposition under Racan's guidance, the Communist Party shed first its name, eventually becoming the Social  Democrats, and then its ideology.

"I am proud of values -- morality, work, integrity and tolerance which we built into political life of (Croatia). I did as much as I knew and could," read Racan's letter of resignation as party head earlier this month.

Croatia's former prime minister Ivica Racan has died. He was 63. He passed away in hospital on Sunday morning after kidney cancer discovered in February spread to his brain. As head of the Croatian Communist Party in 1990, Racan allowed the country's first free elections. The result brought the nationalist, independence seeking HDZ to power and led to Croatia's secession from Yugoslavia. His renamed Social Democratic Party remained in opposition for a decade until he led a broad centre-left coalition into government. As prime minister, he is credited with introducing political and economic reforms which ended Croatia's international isolation and set the country on the road towards European Union membership.