AUSTRALIA water polo star Pietro Figlioli produced an explosive third-quarter performance that briefly put the Sharks on track for an upset victory of Croatia before the powerhouse opponent won 10-9 last night.
The Sharks seemed likely to be gutted as Croatia jumped to a 6-1 lead approaching half-time in the group match at the world swimming championships in Melbourne. But Figlioli inspired a third-quarter comeback, scoring four consecutive goals, before Croatia showed its class at Melbourne Sports and Aquatic Centre. The result means Australia must defeat South Africa in its final group match tomorrow night to progress to the second round. Sharks veteran Gavin Woods troubled the Croatia defence all night, scoring four goals, while Croatia's Miho Boskovic also scored four times in a power-packed performance.
Australia started nervously against the well-drilled Croatia outfit, and Boskovic scored the only goal of the opening stanza, in which Australia captain Thomas Whalan has a penalty shot blocked. The home side quickly responded after the break, with Woods taking advantage of a rare opening in front of goal. But the goal seemed to ignite Croatia, and the European side charged to a 6-2 half-time lead - with Boskovic bringing up his hat-trick before the break. To add to Australia's problems, one of its guns, Sam McGregor, had already been fouled out with more than half the match to be played. But Figlioli stepped up, his thunderous right arm unlocking the Croatia defence to score a hat-trick in just three minutes.
The home side levelled the scores at 6-6 before a steadying goal from Croatia captain Zdeslav Vrdoljak, and the Europeans led 8-7 at three-quarter-time. Croatia then had that little bit of class to hold on in the final term.
http://www.theaustralian.news.com.au/story/0,20867,21432072-23218,00.html 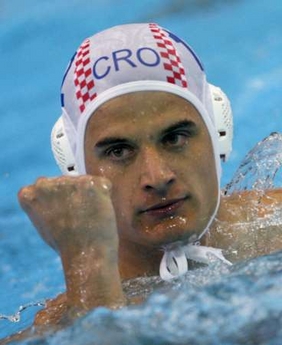 Miho Boskovic of Croatia celebrates his goal against Australia during their preliminary water polo match at the World Aquatics Championships in Melbourne March 22, 2007. REUTERS/Laszlo Balogh (AUSTRALIA) 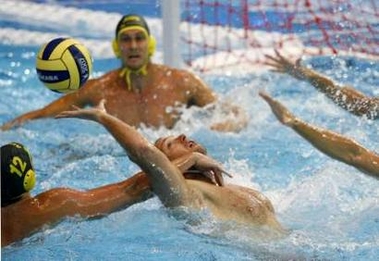 Mile Smodlaka (R) of Croatia and Jamie Beadsworth of Australia (12) fight for the ball during their preliminary water polo match at the World Aquatics Championships in Melbourne March 22, 2007. REUTERS/Nir Elias (AUSTRALIA) 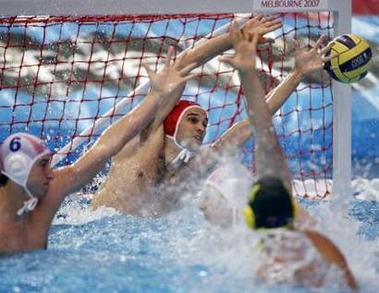 Frano Vican of Croatia makes a save during their preliminary water polo match against Australia at the World Aquatics Championships in Melbourne March 22, 2007. REUTERS/Laszlo Balogh (AUSTRALIA) 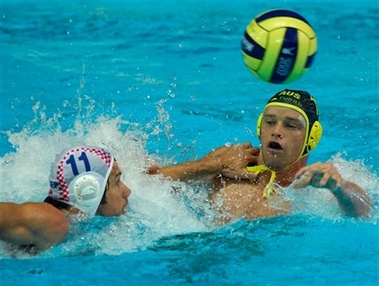 Robert Maitland, right, of Australia and Igor Hinc of Croatia battle for the ball during their men's waterpolo match at the World Swimming Championships in Melbourne, Australia, Thursday, March 22, 2007. (AP Photo/Steve Holland)
Formated for CROWN by   Marko Puljiæ
Distributed by www.Croatia.org This message is intended for Croatian Associations / Institutions and their Friends in Croatia and in the World. The opinions / articles expressed on this list do not reflect personal opinions of the moderator. If the reader of this message is not the intended recipient, please delete or destroy all copies of this communication and please, let us know! Or simply...enjoy and spread the word and good vibrations.