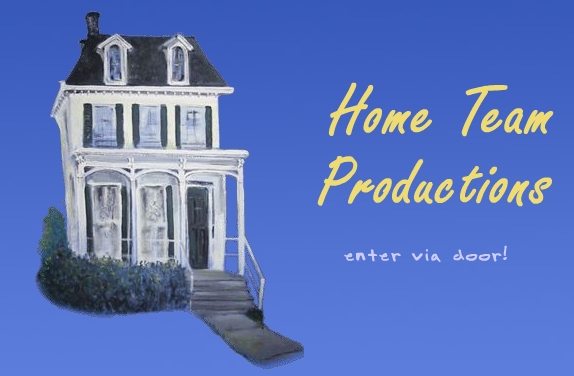 PROUDLY ANNOUNCES THE PREMIERE OF

For more information call the Westchester County Film Office at (914) 995-2917. Tickets are $8 for adults and $5 for seniors and students. One ticket admission covers all performances for a single day.

The hour-long film follows a family of street performers who called themselves THE FLYING NEUTRINOS.  They were homeless by choice, and for twenty years they documented their lives with an old high-8 camera, capturing adventures that ranged from a stint in a Mexican circus to pitting a scrap raft against the Atlantic Ocean.  Their greatest achievement - creating for themselves an alternate universe with a value system all its own.  Down and out never looked so rich.

"Movies like to pretend they're different, but RANDOM LUNACY really, truly is.  Gifted filmmakers Zimet and Silber throw us into a life that intoxicates, infuriates and leaves us panting for each unforgettable adventure.  Prepare to be wowed."

The incomparable Poppa Neutrino believes that "rent is the thing that really beats us." As if to prove his point, he's raised his family on the streets, sleeping in cars, cemeteries, and homemade rafts. The vessels were skillfully built by the family themselves, from materials plucked from the garbage.

Mainstream America might regard the family group of buskers called The Flying Neutrinos as homeless, but they like to think of themselves as "sans domicile fixe," an expression that implies no fixed address by choice.

"There are a lot of people who live on the streets who are really stuck and have no options, but it didn't bother us. We were on an adventure."
-Ingrid, Poppa's daughter

Home Team Productions invites you to preview this extraordinary saga!

Movies like to pretend they're different, but Random Lunacy really, truly is.  The gifted filmmakers Victor Zimet and Stephanie Silber  have grabbed themselves a subject who can wiggle off any hook, so they avoid glib judgements and do the smart thing by wiggling right along with him. It turns out to be the only way to tell this questing, quicksilver  story. The subject is Poppa Neutrino, the name David Pearlman, now 74, has been calling himself for decades. And since a neutrino is "a sub-atomic particle in constant motion," the name fits. Poppa doesn't work, pay rent, listen to doctors or kiss institutional butt. He prefers to invent his life as he goes along, whether he's building a raft out of scraps and sailing the Atlantic,  inventing a new football play or  touring the world from Mexico to Russia with his band, the Flying Neutrinos. But don't discount the intellect that Poppa uses to back up his wit and daring as leader of his tribe. That's right, tribe. Family is what you call the Waltons. The collection of wives, children, step-children and believers who make up the Neutrinos defies categorization. And so, using Poppa's own videos to augment their tale, Zimet and Silber throw us into a life that intoxicates, infuriates and leaves us panting for each unique and unforgettable adventure. Prepare to be wowed.

RANDOM LUNACY: Videos From The Road Less Traveled
Sometimes truth is stranger than fiction. When Victor Zimet heard the workmanlike thump of Preservation Hall jazz wafting through the Forty-second Street subway station almost 20 years ago, he was unprepared for the entirely unconventional family he found creating that exuberant sound. From the bearded Poppa Neutrino, to his sea-captain wife Betsy, to their multi-talented, singing, dancing, jazz-playing kids - he was captivated. Perhaps it was the sight of the flaxen haired three-year-old Jessica's tap dance stylings, with big sis Marisa on drums that ultimately convinced him - here was a story waiting to happen. Zimet talked a local television station into allowing him to produce a short piece on the family, who became his friends. In 1999, he co-produced a segment for National Geographic featuring the Neutrinos, whose adventures he had continued to document. And, for twenty years, The Flying Neutrinos filmed their own doings. Now, HOME TEAM PRODUCTIONS is prepared to tell the amazing story of the last true adventurers of our time - a family which has lived on the street while transforming its members into creditable musicians; a family which has built its own sea-worthy raft from New York City street detritus - and sailed it across the Atlantic; a family which boasts a child who, in a new spin on the old story, ran away from the circus in order to join a conventional home. (The Neutrinos were traveling at the time with a Mexican circus.) The family continues be extraordinary. The children are grown and thriving, with careers of their own to navigate. And the Neutrinos - by definition, invisible sub-atomic particles in constant motion - remain, true to their name, on the move. Their story promises to be an important sociological document as well as a profound testament to the independent spirit.