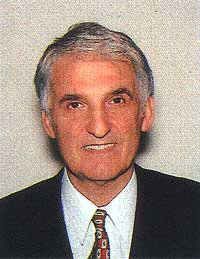 Last year, in a special ceremony in Campbell, the Mexican native earned that right.

On Thursday, in between music, dancing and great Mexican food, she and nine of her fellow students received certificates at the Watsonville Senior Center from their teacher, John Basor, 58, a Croatian immigrant who graduated from Watsonville High School in 1967 and has become fluent in English, Spanish and Russian while still using his native Croatian language.

"Handing these certificates out and seeing the expressions on their faces is always a great joy for me," said Basor, who has taught citizenship classes for Watsonville/Aptos Adult School for more than 30 years. "I know what it's like to be in their footsteps because I've been there myself. I became a U.S. citizen in 1975"

Since then, Basor has taught hundreds of classes to thousands of immigrants who come from faraway countries but wound up in Watsonville, lured by the promise of agricultural jobs.

Their individual stories on how they came to the Pajaro Valley include crossing oceans, rivers and deserts to get here - whether from Mexico, Central America or as far away as the South Pacific.

But what's even more intriguing, Basor said, is their undeterred spirit - their desire to work long hours in the fields, then show up at Basor's class to learn about U.S. history, geography and the Constitution.

"He's a great teacher because he's so patient," said Sandoval Meza, who could neither read nor write in Spanish or any other language before she met Basor nearly 10 years ago.

But today she can get by in English and read and write in Spanish, thanks to Basor.

If it weren't for him, she said, she never would have passed the citizenship exam.

"It's so much easier to learn when you've got a teacher who is capable of switching back and forth from English to Spanish," she said.

While not all of Basor's students are as limited in their abilities as Meza, they all share a common ambition: To learn more about the United States, one of the prerequisites to becoming a citizen.

And so Basor prepares his students each year for the citizenship exam, drilling them for expected questions, some of which include: "How many stripes are on the U.S. flag? Who is the chief justice of the Supreme Court today? And in what year was the Constitution written?"

When Basor isn't teaching citizenship classes, he's teaching English and Spanish at Watsonville High School. He knows what it's like to be an immigrant because he first arrived in Watsonville in 1963 with his mother and his father and his three sisters when he was 14.

At the time, there were thousands of Croatians working in Watsonville, mostly in the apple industry, he said. Although there were plenty of Latinos, their numbers weren't as prevalent because they traveled from job to job under the Bracero Program. The Croatians, however, were more settled in their jobs and ways, having immigrated here decades earlier.

In fact, in the foyer of Watsonville City Hall is a plaque welcoming them in their native language. It says, "Dobro Dosli," the Croatian greeting for "welcome"

A 1967 graduate of Watsonville High School, he started learning Spanish soon after he got here so that he could talk to the farmworkers who worked in his uncle's apple orchard.

"I always remember liking the sound of the language," said Basor, who spoke Croatian at home while learning English and Spanish on the streets and in the classrooms.

Eventually, Basor went on to study Russian at Cabrillo College and received a bachelor's from UC Santa Cruz in linguistics and foreign language [Spanish and Russian].

In 1989, Basor earned his master's in education from San Jose State.

But it's in the classroom where he finds himself most comfortable as he mixes it up with the students of like mind and similar backgrounds.

"My family came to this country for a better life and that's exactly what my students wanted when they first came here," he said. "And when they become U.S. citizens, for many it's their ultimate goal, their dream come true. And it's great to be a part of that"

WHEN: Noon to 3 p.m. Monday through Thursday.

Formated for CROWN by á Marko Puljiµ
Distributed by www.Croatia.orgáThis message is intended for Croatian Associations / Institutions and their Friends in Croatia and in the World. The opinions / articles expressed on this list do not reflect personal opinions of the moderator. If the reader of this message is not the intended recipient, please delete or destroy all copies of this communication and please, let us know! Or simply...enjoy and spread the word and good vibrations.