On behalf of the Confédération Internationale des Accordéonistes (CIA) Executive Committee and CIA Member Nations worldwide, it is my great pleasure to announce that your recent nomination for the CIA Merit Award was unanimously approved at the 117th General Assembly of Delegates on the 24th January 2007 held at Nagigia Island, FIJI.

The Confédération Internationale des Accordéonistes (CIA) takes great pleasure in recognizing outstanding contributions to the International accordion world, and we are very pleased to be able to honor your work by selecting your for this prestigious CIA Merit Award.

You have made many contributions to the accordion field by introducing the accordion into the school curriculum, organizing seminars and workshops featuring distinguished international teachers and artists, leading accordionists from Croatia to International festivals and competitions and of course your work with publishing your accordion textbooks which have now been published in English, German, Italian, Hungarian and Czech.

We thank your for your work, and wish you much success in your efforts to further the international accordion scene by hosting the finest accordionist professionals and students in the world when they meet in Croatia for our 2010 Coupe Mondiale World Accordion Championships and Festival.

Ms Vjera Odak, a teacher at the Elly Basic school of music, was chosen among 117 candidates from all around the world to receive the most significant award for classical accordion teachers - the CIA Merit Award.
She will receive the award in August 2007 in Washington, during the 60th Coupe Mondiale, world's largest classical accordion competition.

Ms Odak was notified of the award by Kevin Friedrich, the president of the Confédération Internationale des Accordéonistes (CIA), after the 117th CIA General Assembly of Delegates, held Jan 23 - Jan 28 in Nagigia Isand, Fiji. The CIA is world's most respected accordion teachers' association, and a member of IMC-UNESCO.

Ms Odak is given the CIA Merit Award as the recognition of her diligence and effort during her 35-year work in promoting the classical accordion in Croatia. During this time she was mentoring her students, taking them to competitions in Croatia as well as abroad, where they regularly won prestigious awards. In 2006 they participated in several international competitions: Triest, Italy (September), Asker, Norway (October), and Sarajevo, Bosnia-Herzegovina (November), winning two first and two third prizes.

Ms Odak is also the author of "The Wonderful World of the Accordion 1-6", classical accordion textbooks and the accompanying CDs which have been translated into several languages and are used in a number of countries. It is a unique case in Croatian music pedagogy, as it promotes the use of teaching material in Croatian, unlike other instruments, taught mainly after foreign textbooks.


Vjera Odak was born on 21st October Siveric, Croatia. She attended primary and secondary music schools in Drnis and Pula, respectively. She graduated from the Music Academy in Zagreb in 1977. After graduation she worked as a lecturer at the Functional Music Pedagogy school of music (now called Elly Basic school of music), which had just started a secondary-school programme for the classical accordion. Ms Odak has been the head of the Accordion Department since 1987, and was promoted to a supervisor in 1997.

She has been one of the first Accordion secondary-school teachers in Croatia, and the first, and so far the only, author of accordion textbooks - six so far - for all forms of primary music schools in Croatia. These books have been translated into English, German, Italian, Hungarian, and Czech languages.

With the goal of improving the professional level of accordion education, in 1993 she initiated the establishment of the Croatian Accordion Teachers Association (Hrvatsko Drustvo Harmonikaskih Pedagoga). With Ms Odak as its president, the CATA joined the International Accordionists' Confederation (CIA) at the CIA congress in Copenhagen, Denmark in 2002.

She has also organized and run a number of professional seminars and workshops for accordion teachers, presenting distinguished international pedagogues and artists.

Her students have taken part in numerous international contests with much success, and Ms Odak has also been a jury member at many international music competitions all around Europe.

For her professional and charity work she has won notable awards, most importantly the Merit Award by the CIA in January 2007.

At the moment Ms Odak is working on promoting her books and organising the 63rd Coupe Mondiale, world's largest classical accordion competition, which is to be held in . 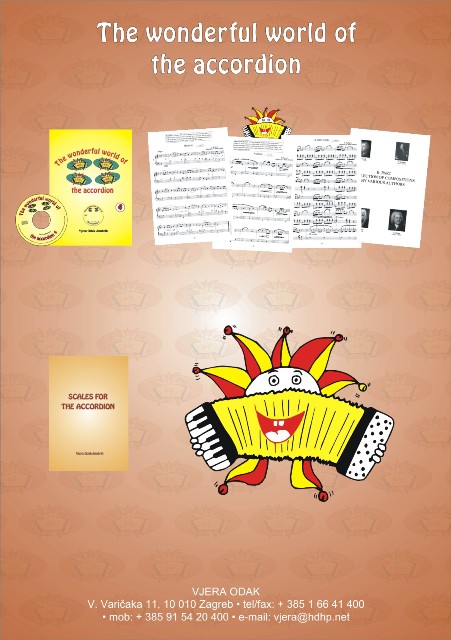 Formated for CROWN by   Marko Puljić
Distributed by www.Croatia.org This message is intended for Croatian Associations / Institutions and their Friends in Croatia and in the World. The opinions / articles expressed on this list do not reflect personal opinions of the moderator. If the reader of this message is not the intended recipient, please delete or destroy all copies of this communication and please, let us know! Or simply...enjoy and spread the word and good vibrations.