Hollywood actor Richard Gere was rushed to hospital in Croatia after breaking a rib while shooting for his new movie but he refused to allow the injury to obstruct the film shoot.

Gere is in the Balkans shooting the film "Spring Break In Bosnia" in which he plays a reporter hunting notorious war crimes fugitive Radovan Karadzic, reported contactmusic.com. The 57-year-old has vowed to return to the sets within a couple of days, despite doctors ordering him to rest. 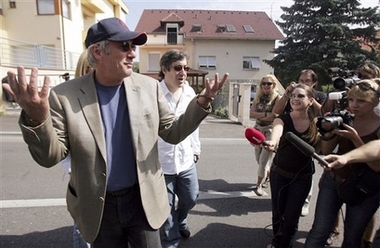 A source said: "Richard injured himself pretty badly and must have been in a lot of pain but he didn't make a fuss. He wanted to resume filming almost immediately."

Formated for CROWN by Ante Katalinic
Distributed by www.Croatia.org . This message is intended for Croatian Associations/Institutions and their Friends in Croatia and in the World. The opinions/articles expressed on this list do not reflect personal opinions of the moderator. If the reader of this message is not the intended recipient, please delete or destroy all copies of this communication and please, let us know!