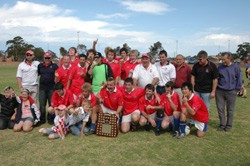 Croatia reserves came out league winners when they defeated Lions this weekend with Westlands coming third after a convincing win over Wanderers. Croatia defeated Lions two-nil with a fantastic performance from every single player on the side. Unlike the A grade side, Croatia were definitely switched on for this match with a number of under 17 players standing out. The first goal came to Sam Perez after John Warren had a shot at goal. The second came from Korean exchange student Meingi Jeong. "It was an overall team performance," Croatia coach Colin Selby said. "It was quite a good game to watch." Six under 17 players started the match with three on the bench, coach Selby aiming at giving the youngsters a bit more experience. "We're playing a lot of junior players to try and develop them," he said. "It was a good team win for the club." Westlands defeated Wanderers four goals to two with one goal each coming from Andrew Ernesti, Peter Rincon, Luke Kelly and David Dunbar. Westlands made an excellent comeback in the second half, after they were down two-nil at half-time. However they powered through scoring four top goals in the second half to put them in front and make them third in the league. "We were still confident at getting something out of the game at half time," Westlands coach Danny Ferguson said. "For our reserve grade that was an excellent achievement, because we usually finish a lot lower than that."


Formated for CROWN by Ante KatalinicÝ
Distributed by www.Croatia.org . This message is intended for Croatian Associations/Institutions and their Friends in Croatia and in the World. The opinions/articles expressed on this list do not reflect personal opinions of the moderator. If the reader of this message is not the intended recipient, please delete or destroy all copies of this communication and please, let us know!