The Reims Evangelistary, a Croatian glagolitic book written in the Prague, Czechia, and kept in France 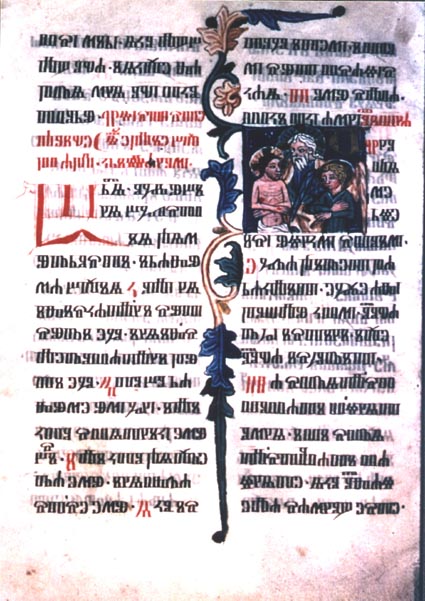 In Prague, capital of Czechia, there are about 20 Croatian Glagolitic manuscripts from 14th to 15th centuries in the library of Narodni Muzeum. In "Narodni a univerzitetni knihovna" (National and University library) you can see the Kirin Croatian Glagolitic psalter, known also as Lobkowitz Glagolitic psalter, according to one of its proprietors in Czechia (1359), written by Kirin from Lika - Krbava region. The National library also has a monumental Czech Glagolitic Bible from 1416 (38x29 cm), where the copyists found it important to state that "the book was was not written by Croat monks, but by Czech monks". The Bible written in the Czech Church Slavonic language and in Croatian Glagolitic is an interesting trace of Croatian culture in Czechia. If you visit an important Czech benedictine convent of Sazava (now museum) built in 11th century, 60 km from Prague, then you will have opportunity to see a room dedicated to the activities of Croatian benedictines in Prague in 14th century. There we can read that the Évangelier de Reims (also called Texte du Sacre, or Livre de Coronation, written by Croatian monks in Prague in 1395), was a book with which for centuries French kings were sworn in. One of them was Louis XIVth.

The famous Czech king Charles IV of Luxemburg built a Glagolitic convent Emaus (na Slovaneh) in Prague in 1347, where eighty Croatian Benedictines from the island of Pasman and Senj were invited. It is remarkable that the convent is not far from the famous Charles University, built the next year, in 1348 (Charles IV also founded the University of Vienna in 1365). One of the Glagolitic books from this convent (Emaus) in Prague came to Reims in 1574, where for centuries the French kings (Charles IX, Henri II, Louis XIII, Louis XIV) were sworn in by putting their hands on this holy book, known under the name Texte du Sacre or Évangéliaire de Reims. This Glagolitic book was written in 1395, and represents a copy of an older Croatian book, written probably in Omisalj. In fact, the Glagolitic book was bound together with a Cyrillic book which is of the Ukrainian (Ruthenic) provenance, written in Kiev, and dates from the 12th century (the Cyrillic part has 16 leaves, and the Glagolitic part has 31 leaves). The book was ornamented with gold, precious stones and relics, and according to [Dolbeau], p 26-27, probably calligraphed on the island of Krk or in a Czech monastery. These Dolbeau's pages are available here.

The French kings were sworn in with the Glagolitic book with the following words:

Precious stones, relics, and a part of the true Cross disappeared from the cover of the book during the French revolution. See [Gregory Peroche], p. 62.

Let us cite the following passage from [Castellan, Vidan, p. 31]:

In 1485/46 a French pilgrim Gheorge Langherand wrote that in Zadar he heard a "Sclavonic" sermon, that is, a Croatian Glagolitic mass. In 1549 a French Franciscan and cosmograph Andre Thevet noted the prayer "Oce nas" (Our Father) in Croatian language. See [Raukar], p. 360.

According to the renowned Czech linguist Nemec, the influence that the Croatian glagolites in Prague had on the formation of orthography of the Czech language was "neither big nor negligible". The Polish king Vladislaw II Jagiello also opened a Glagolitic convent in Krakow (Kleparz) in 1390, where the Glagolitic priests were active for almost 100 years. His wife Jadviga was of the Croatian descent.

As a young man Charles IV visited for several days the Croatian coastal town of Senj in 1337, when he was only 21. In this important Glagolitic center, with the unique Roman Catholic cathedral where only the Glagolitic liturgy in Croatian Churchslavonic language had been served (instead of Latin rite), he made friends with the nobleman Bartolomej Frankapan. Frankapan supplied him with military escort on his journey to Tirol, where he was to meet his brother.

There exist even earlier important traces of cultural contacts between Czechs and Croats, going back to 10th and 11th centuries. If you visit Prague, we recommend you to see the famous monastery in Sazava, just 60 km from Prague. There you can find the "Croatian room", describing in detail the presence of the Croatian glagolites in Czechia. For additional information see here.

It is worth noting that the famous Czech lexicographer Bartolomej z'Hlouce, better known as Kloret (14/15th centuries), wrote his Latin - Czech dictionary where Latin words are translated into Czech, while words of the Greek or Hebrew origin are translated - into Croatian! For example: sanctus -> svat, hagios -> svet.

A Czech chronicler Pulkava from 14th century (died in 1380) mentions that "to this day bishops, as well as priests, serve the Holly Mass and other rituals in their slavic language in archbishoprics and provinces of Split, Dubrovnik and Zadar." See [Strgacic].

Formated for CROWN by prof.dr. Darko ZubrinicDistributed by www.Croatia.org . This message is intended for Croatian Associations/Institutions and their Friends in Croatia and in the World. The opinions/articles expressed on this list do not reflect personal opinions of the moderator. If the reader of this message is not the intended recipient, please delete or destroy all copies of this communication and please, let us know!