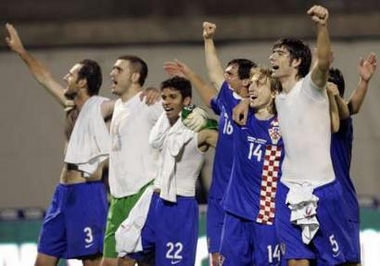 ZAGREB, Oct 11 (Reuters) - Croatia claimed a fully-deserved 2-0 win over a lamentable England on Wednesday to go top of Euro 2008 qualifying group E with seven points, above their opponents on goal difference with a game in hand.

The impressive hosts were in command from the start as England struggled to adapt to their unfamiliar 3-5-2 line-up and Paul Robinson was forced into two great saves midway through the first half to deny Niko Kranjcar.

England finally managed an effort on goal in the 54th minute when Wayne Rooney shot over the bar but Croatia's creativity paid off on the hour when Nico Kovac curled in a deep cross from the left and Eduardo da Silva was able to score with a simple looping header with Robinson stranded.

That ended the keeper's chance of setting an England record of seven consecutive clean sheets.

He then made a calamitous error when he completely missed a Gary Neville backpass and watched it roll into his net to cap a forgettable night for the world's fourth-ranked team and extend Croatia's unbeaten home record in competitive games to 30.