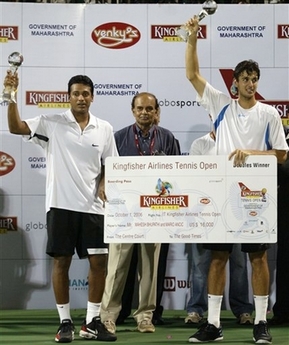 Mahesh Bhupathi , left, of India and Mario Ancic of Croatia, right, pose with the winners' check and the trophies after defeating the Indian duo of Rohan Bopanna and Mustafa Ghouse in the doubles finals match of the Kingfisher Open Tennis in Mumbai, India, Monday, Oct. 2, 2006. Bhupathi and Ancic defeated Bopanna-Ghouse 6-4, 6-7, 10-8 to win the doubles' title. Doubles is an art, they say. And after watching the last three matches at the Kingfisher Airlines Tennis Open, one has to agree to that. The final on Monday, between the Indo-Croat pair Mahesh Bhupathi and Mario Ancic and the rookie Indian combination of Mustafa Ghouse and Rohan Bopanna was a treat. In the final analysis, the fact that the former emerged winners by a whisker 6-4 6-7 10-8 hardly mattered as much as the match in itself.
Doubles is an art. An art that Bhupathi has perfected. An art that Ancic is getting used to. And an art that the Bopanna-Ghouse showed that they have an innate ability to master it.
As a first-time pair, Bopanna-Ghouse did a commendable job. A first round upset of the tournament's top seeds Alexander Peya and Bjorn Phau - laid a "good foundation for the tournament ahead." And to their credit they were not intimidated by their opponent's reputation.  That explains why they were very much in the match till the very end.
Doubles is an art. An art one has to learn while at work. And that is exactly what the rookie pair did. There were times Bopanna/Ghouse on the back foot. Like in the eighth game of the first set, when they were down 0-40 on Ghouse's serve. Or in the second set tiebreak, when they were again down 1-5. Or for that matter in the super tie-break when they initially went down 1-5 and it looked as good as over. But they came back, on each occasion, and made a match of it. 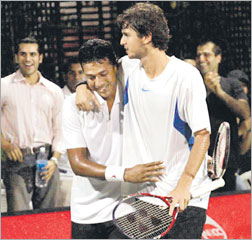 So focused was the pair towards their game that their more famous opponents felt the heat on many occasions. The defining moment was perhaps when Mahesh Bhupathi double-faulted on match-point in the second set tiebreak. And when they leveled at 8-8, after being 1-5 down, in the super tiebreak.
In the end, it was a difference of a couple of points. Or maybe it's Ancic/Bhupathi's experience that helped them secure their second straight title in three weeks (after Beijing). But experience is something that comes with playing more and more tournaments together. Bopanna/Ghouse would do well to stick together and learn about playing as a team. Doubles, after all, is an art.


Formated for CROWN by Ante Katalinic
Distributed by www.Croatia.org . This message is intended for Croatian Associations/Institutions and their Friends in Croatia and in the World. The opinions/articles expressed on this list do not reflect personal opinions of the moderator. If the reader of this message is not the intended recipient, please delete or destroy all copies of this communication and please, let us know!