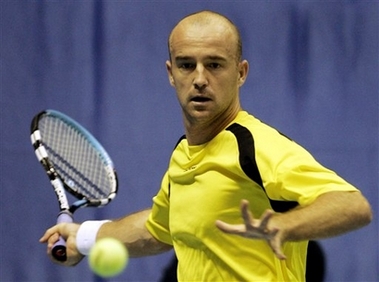 Ivan Ljubicic of Croatia aims a forehand to James Blake of the United States during their final match of the Thailand Open tennis tournament in Bangkok, Thailand. American James Blake dominated top-seeded Croatian Ivan Ljubicic 6-3, 6-1 Sunday, Oct. 1, 2006 to win the Thailand Open final. Third-seeded Blake controlled the match from the start with superior ground strokes, wrapping up his fourth title of the year in less than an hour. "I played great since the beginning. His serves were a little off,'' said Blake. "It's a combination of me playing well and him not playing the best through the whole match. It happens to everyone.'' Ljubicic, who reached the final by downing Thailand's Paradorn Srichaphan with the help of 17 aces, seemed off his game. Blake stormed out to an early 2-0 lead in the first set and went up 4-0 after Ljubicic double-faulted. Ljubicic won a game back with his powerful serve and trimmed Blake's lead to 5-3 before the American closed out the set.

In the second set, Blake capitalized on Ljubicic's unforced errors, running up the score up to 5-1 before closing out the match after Ljubicic double-faulted. "He was too good. He read my serves perfectly,'' said Ljubicic. "He put a lot of pressure on me. He was more relaxed and had nothing to lose. I'm disappointed. I wanted to fight but I was never there from the first point.'' The victory was Blake's seventh career ATP title and his first win against Ljubicic. 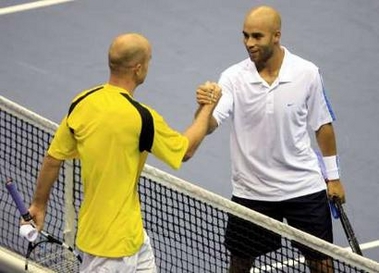 Formated for CROWN by Ante KatalinicÝ
Distributed by www.Croatia.org . This message is intended for Croatian Associations/Institutions and their Friends in Croatia and in the World. The opinions/articles expressed on this list do not reflect personal opinions of the moderator. If the reader of this message is not the intended recipient, please delete or destroy all copies of this communication and please, let us know!