The one-day meeting, held in the Croatian coastal town of Primosten, Saturday Sept. 30, 2006. was focusing on 20 years of "perestroika" -- a program of democratic and economic reforms that Gorbachev started in the former Soviet Union. 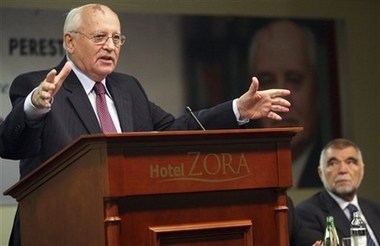 Former US president George Bush who was also invited addressed the participants through a video broadcast message. Gorbachev's reforms known as perestroika first liberalized and eventually helped the dissolution of the Soviet Union in 1991. Gorbachev, who led the Soviet Union during the 1985-1991 periods, was awarded the Nobel Peace Prize in 1990.

A number of VIPs thanked in Primosten the former Soviet president Mikhail Gorbachev on the political and economic reforms that contributed to the introduction of democracy in the Eastern Europe late in the 20th century. The participants in the celebration of the 75th birthday of the last president of the USSR, Mikhail Gorbachev, gathered at the "Zora" Hotel to thank him for "perestroika", including the Croatian President Stjepan Mesic, the former Romanian President Constantinescu, the former Hungarian Foreign Minister Janos Martonyi, vice president of the European Parliament, Janus Onzsykiewicy from Poland, and the former French Foreign Minister Roland Dumas. The birthday celebration ended with a gala dinner and fireworks for over 200 guests at the "Zora" Hotel.

Formated for CROWN by Ante Katalinic
Distributed by www.Croatia.org . This message is intended for Croatian Associations/Institutions and their Friends in Croatia and in the World. The opinions/articles expressed on this list do not reflect personal opinions of the moderator. If the reader of this message is not the intended recipient, please delete or destroy all copies of this communication and please, let us know!