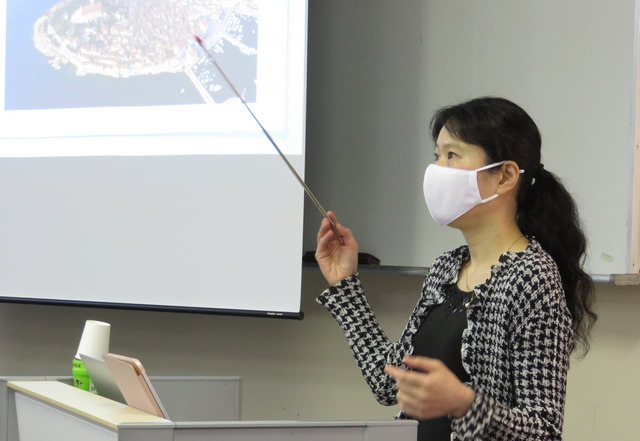 Yoko Nishii during her lecture in Toba, describing the city of Rovinj in Croatia 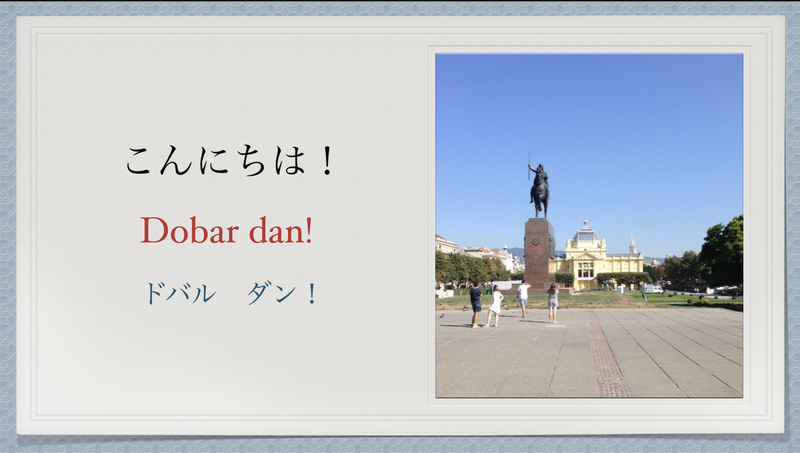 Dobar dan! Good Day! in Croatian and Japanese
On the right, the square of King Tomislav (10th century) in Croatia's capital Zagreb. 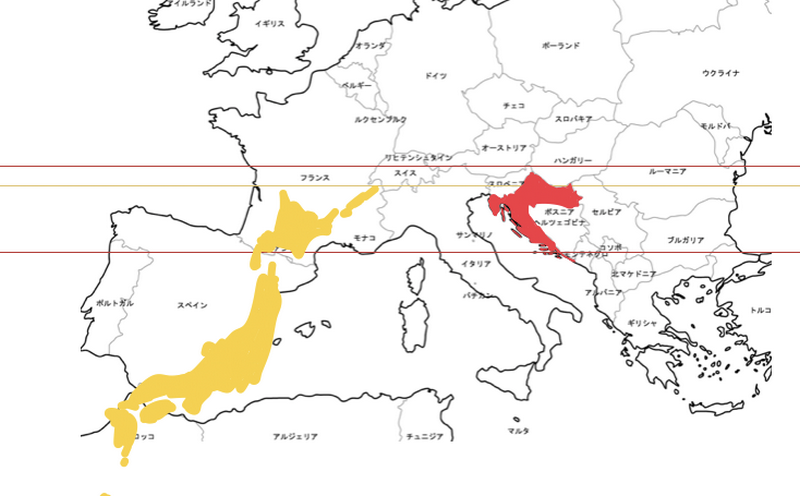 An interesting comparison of the sizes of Japan and Croatia, prepared by Yoko Nishii.
Also, Croatia and Japan are placed at very close relative positions in the following sense:
Croatia is placed between 42nd and 47th parallels, indicated by red lines
(i.e., Croatia is placed almost precisely the half way from the Equator to the North Pole),
while Japan is placed between 25th and 45th parallels. Croatia corresponds roughly to 70% percent of
the area of the island of Hokkaido. This Japanese island is also placed roughly between the same parallels as Croatia. 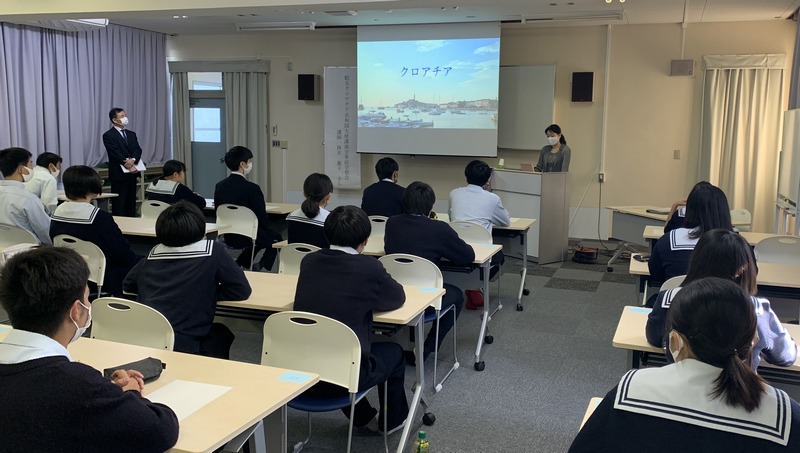 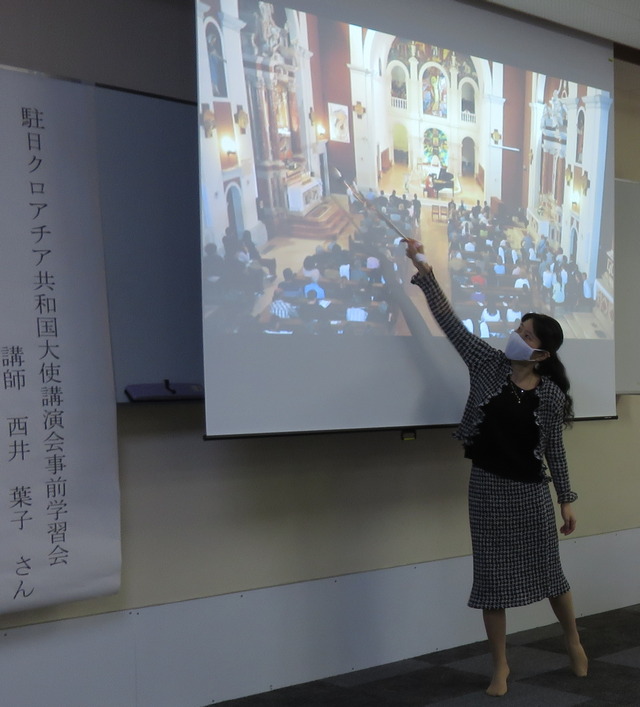 Yoko Nishii describing her concert in the Church of the Miraculous Lady of Sinj, organized in the city of Sinj, Croatia.
In 2015, she he had an honor to play piano just in front of the main altar of the church, on the occasion of
300th anniversary since successful defense of Sinj from the Turks (1715-2015). 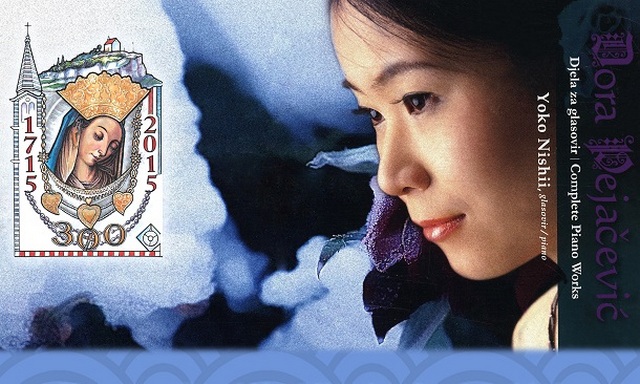 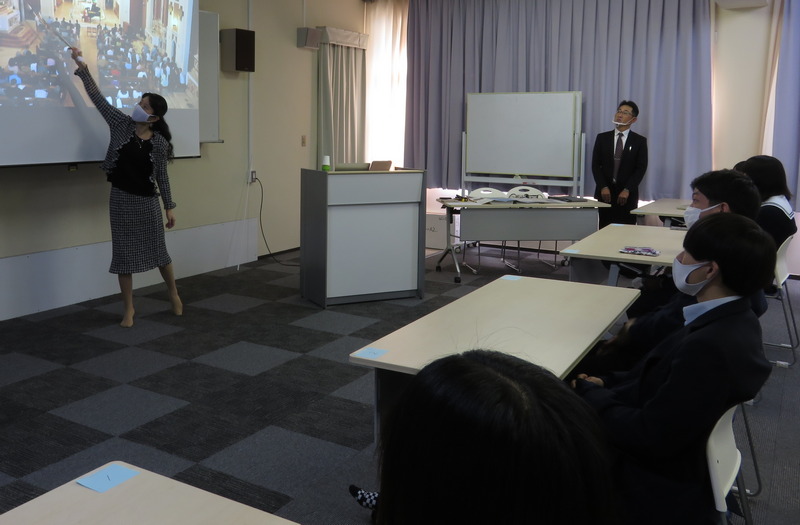 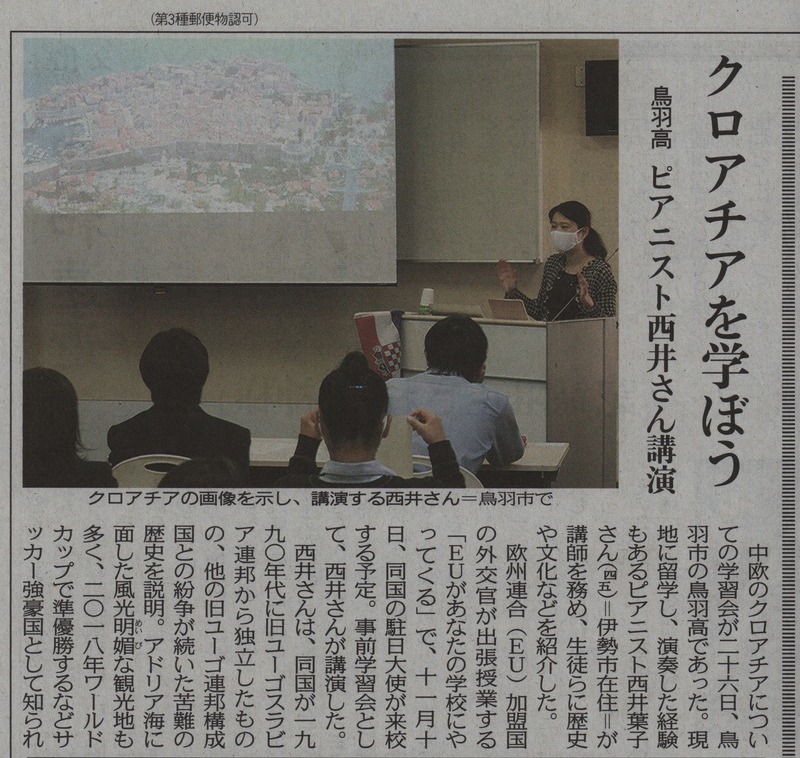 Newspapers Chunichi Shinbun in the city of Toba, reporting about Yoko Nishii's lecture dealing with Croatia.
On the photo, Yoko Nishii is showing and commeting a slide representing Dubrovnik, one of the most beautiful cities on the Mediterranean. 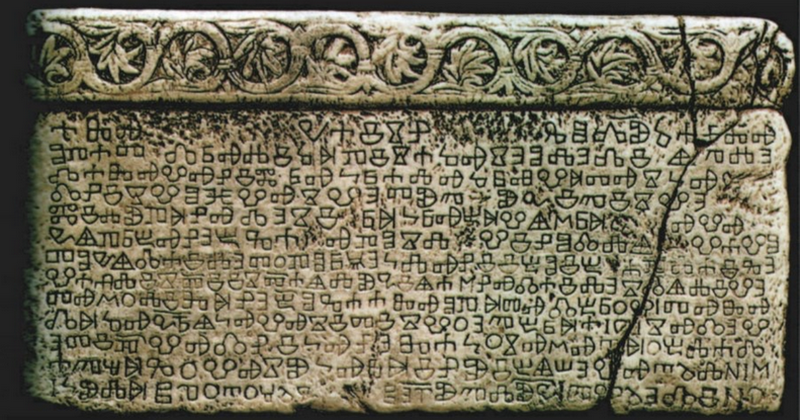 In her lecture, Yoko Nishii reported about the exotic Croatian Glagolitic Script.
Exhibited here is the Baąka Tablet from arround 1100 AD, weighing about 800 kg, 2 x 1 m, one of the most important monuments of early Croatian literary history.
In its third line, one can read "Zvonimir Croatian King". 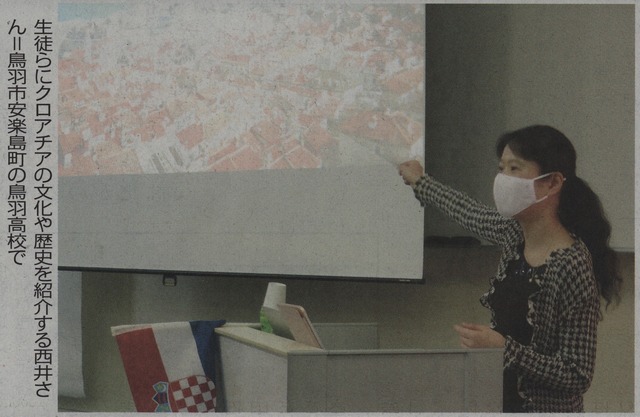 Newspapers Ise Shinbun published in the city of Ise, where Yoko Nishii lives,
reported about her lecture organized in Toba, dealing with Croatia 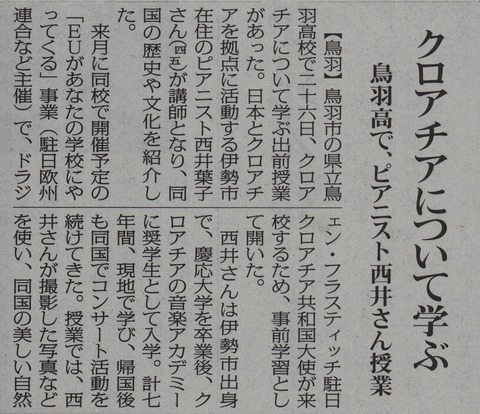 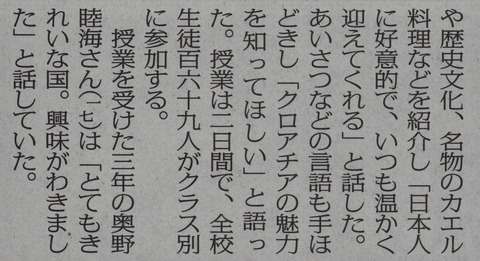 Yoko Nishii has prepared 150 slides about Croatia, shown during her very interesting lecture in Toba. 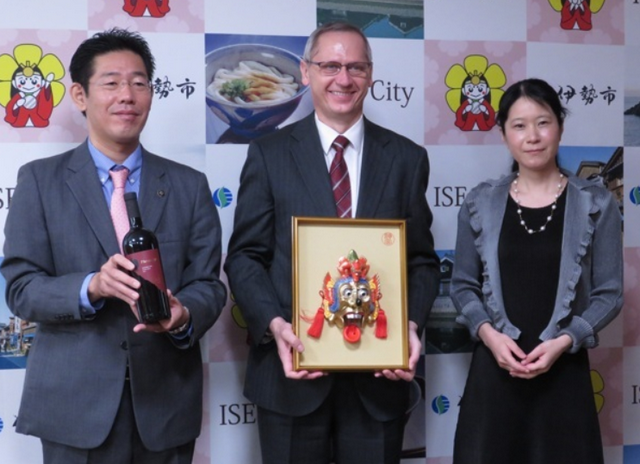 Croatian ambassador to Japan H.E. Draľen Hrastić (in the middle) with Mr. Kenichi Suzuki, mayor of the city of Ise,
and Yoko Nishii, 9th November 2020. Source. 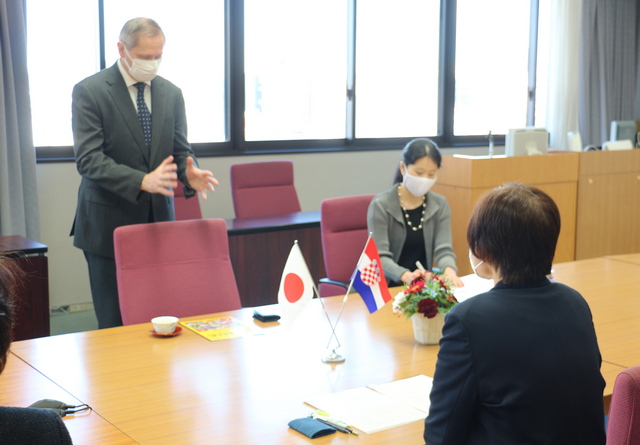 Croatian ambassador Draľen Hrastić visited vice-governor of the Prefecture of Mie, on 10th November 2020.
Here as well, Yoko Nishii served as translator from Croatian to Japanese an vice versa.
The next day, she accomanied him to the Shrine of Ise and showed him the environs of the city.

"Piano Concert & Lecture for International Understanding" was organized on 26th November 2020 by the Ise City Board of Education
at the Elementary School "Shinshu" and the Junior High School "Isuzu" in Ise City.
Yoko Nishii: The piano I played at the Junior High "Isuzu" was the one I used to play when I was a junior high school student there,
so it was really very special for me that I could meet and play that piano again. 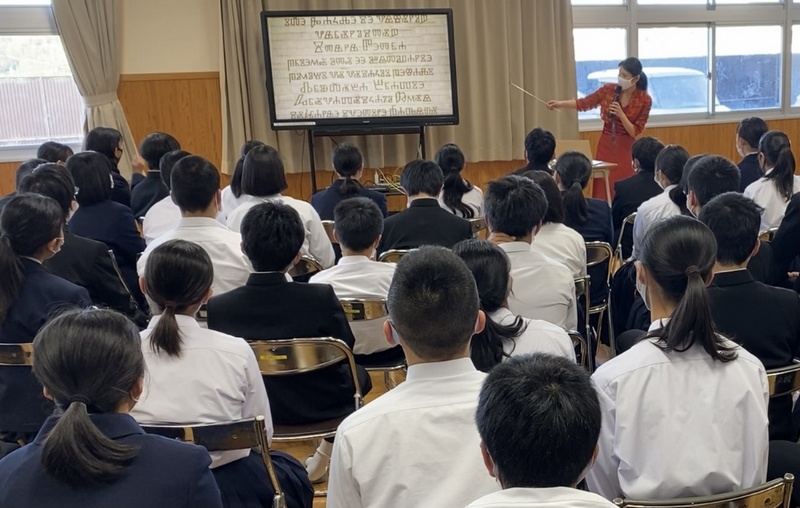 Describing the Vučedol pot, excavated in the city of Vinkovci in Croatia. It belongs to the Vučedol culture, 3000-2200 B.C. 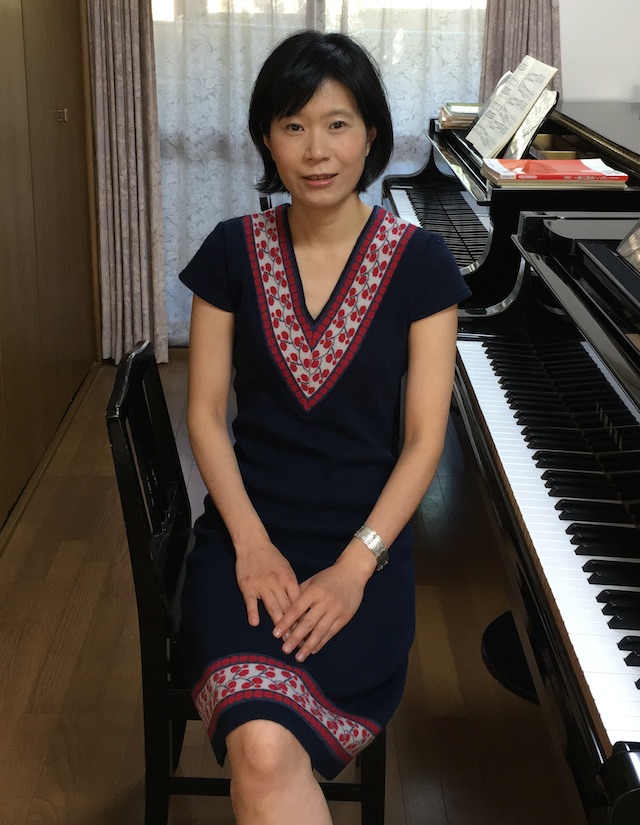 Yoko Nishii wearing her very nice Vinkovci dress in her home in the city of Ise, Japan.
On her left hand, she is wearing the Orion bracelet produced in Vinkovci (obtained as a gift in 2015)
which represents the oldest Indo-European calendar: 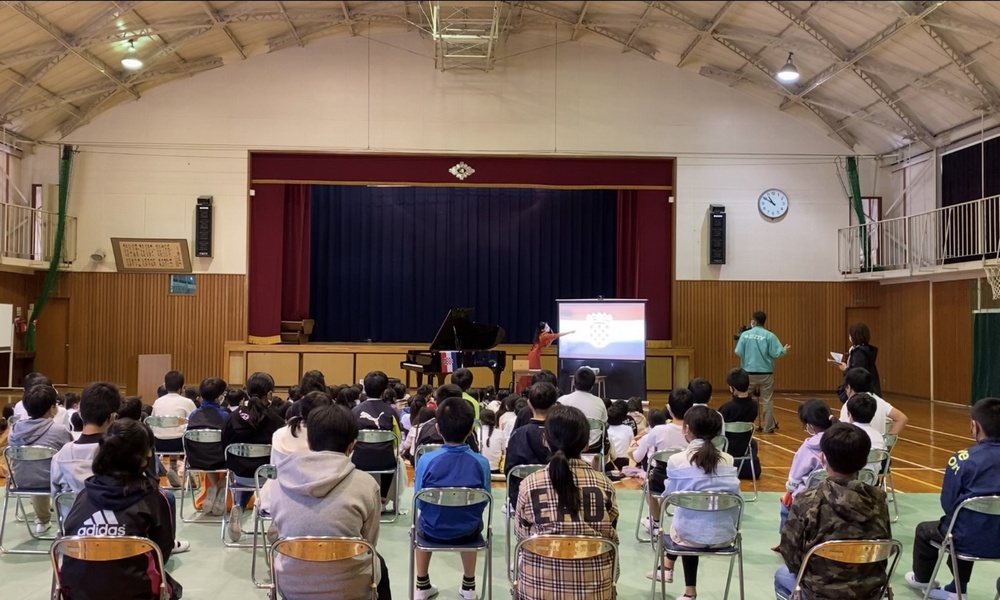 Yoko Nishii lecturing about Croatia in the Elementary School "Shinshu" in the city of Ise.
Croatia - Japan