CROWN - Croatian World Network - http://www.croatia.org/crown
Nikola Tesla's schooling in Croatia lecture at the Embassy of the Republic of Croatia in Paris 2020
http://www.croatia.org/crown/articles/11200/1/Nikola-Teslas-schooling-in-Croatia-lecture-at-the-Embassy-of-the-Republic-of-Croatia-in-Paris-2020.html
Darko ®ubrinić
By Darko ®ubrinić
Published on 01/30/2020
Croatia is the country of origin of Nikola Tesla 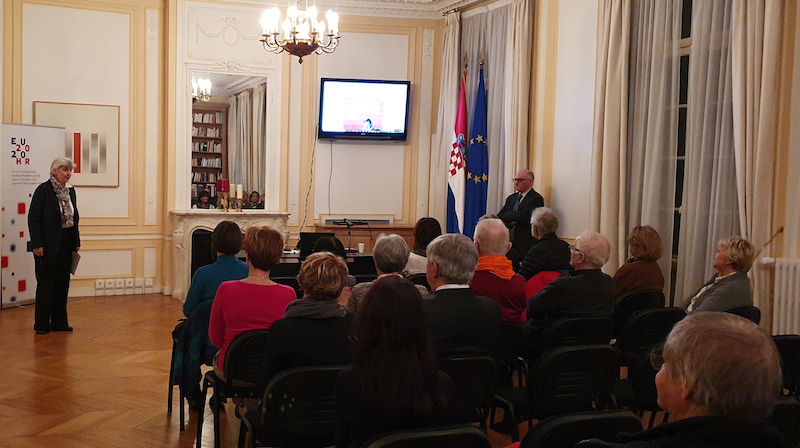 Mr. Ante Glibota, second from the right, was also among the listeners.

A group of members of the AMCA-Paris Association with H.E. Mr. Filip Vučak and his wife in the middle. The second and fourth from the left are
Mr. Damir Perinić (former president of AMCA-Paris) and Mrs. Lamia Barbier Ruľdić (the current president of AMCA-Paris).
On the right to her (and on the left of D.®.) is Dr. Vita Ilakovac-Casses.
Source: Schooling of Nikola Tesla in Croatia and his teacher Martin Sekulić

Marinko Frka Peteąić with his daughter Tina on his right, after the lecture.
On the far right, Mrs. Maja Cioni b. Bulić, secretary of the AMCA-Paris Association.

A friendly chat after the lecture at the Croatian Embassy in Paris. On the right Mrs. Biserka Krslin-Barda.
Photos from the Embassy of the Republic of Croatia in Paris by Tina Frka-Peteąić Chemin.