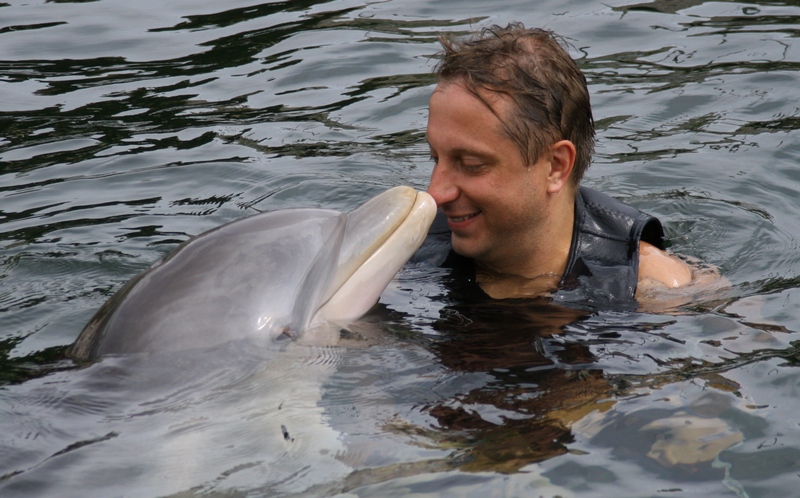 Marin Soljačić became full professor of physics at MIT at the age of 37, swimming with a dolphin in Florida.
Photo by the courtesy of his father professor Ivo Soljačić, University of Zagreb, via Snjeľana Boľić.


Jun 30, 2015 Marin Soljačić, distinguished Croatian-American physicst and professor at MIT, USA, delivered a very interesting talk at the 2015 Tech Day, dealing with newest achievements in nanonphotonics and possible applications. Nanophotonics is a sub-field of nanotechnology that deals with light (photons). Nanophotonic techniques provide ultimate opportunities for tailoring behavior of light, thus offering a potential to enable a wide variety of important applications. This talk highlights recent work in this area, including security applications (for consumers and soldiers), energy conversion, and displays.


Jan 28, 2014 A new phenomenon could lead to new types of lasers and sensors.
http://spie.org/op - SPIE Optics + Photonics Symposium
Marin Soljačić, a professor of Physics at the Massachusetts Institute of Technology (MIT), is the principal investigator for the Photonics and Modern Electro-Magnetics Group (MIT). Last year, the group discovered an new method of light trapping by pitting light waves against light waves.
"For many optical devices you want to build, you need a way to confine light," Soljačić says in an interview with MIT News. The system developed by the MIT researchers blocks light through destructive interference from other light waves that are precisely out of phase. "It's a very different way of confining light," Soljačić says.
Soljačić received a BsE degree in physics and electrical engineering from MIT in 1996, and earned his PhD in physics at Princeton University in 2000. Also in 2000, he was named an MIT Pappalardo Fellow in Physics, and in 2003 was appointed a Principal Research Scientist in the Research Laboratory of Electronics at MIT. He is the recipient of the Adolph Lomb medal from the Optical Society of America (2005). He was promoted to Full Professor in July 2011.
Soljačić is an author of more than 20 papers in SPIE Proceedings, and has served as a program committee member and session chair in several SPIE symposia.