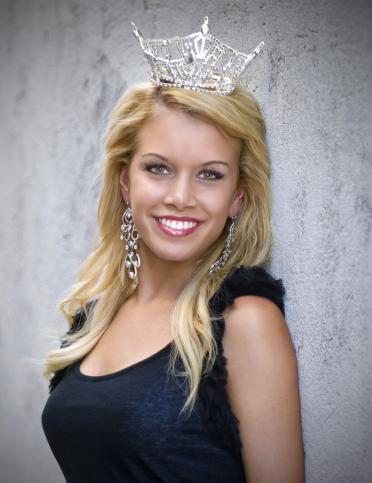 The origins of the newly crowned Miss USA can be traced back to the small Croatian island of Ilovik, which her grandparents left many years ago to move to the United States.

The 17-year-old Teresa Scanlan is the youngest winner in the history of the contest and the first young woman from Nebraska to take the crown. The blond beauty is also part Croatian.

Scanlan's grandparents Nives and Frank Jelich went to the United States many years ago. Scanlan has visited her grandparent's home island of Ilovik several times, the portal Slobodna Dalmacija writes.

The contestants had to show off not only their beauty but various talents and knowledge. To judges' inquiry as to what she thought about the WikiLeaks affairs, Scanlan answered that "national security comes ahead of people’s rights to information."


Road to U.S. for Miss America’s family began in Croatia

New 2011 Miss America Teresa Scanlan’s grandparents escaped from the former Yugoslavia by leaving a tiny island in the Adriatic Sea on a raft bound for Italy. They eventually landed in America as political refugees as Croatians, and one of the first TV shows that they watched was the Miss America Pageant.

“I can’t believe this is happening to us,” Grandma Scanlan told me right after Teresa was crowned Saturday night at Planet Hollywood. “It happens to other people. This totally proves that the American Dream can come true.”

Teresa’s mom Janie became a first-born American. Her family, except for oldest brother Jared, attended the pageant. Janie explained to me: “His first baby is due any time now. There have already been two false-alarm runs to the hospital. I become a first-time grandma. Mom becomes a first-time great grandmother, and Teresa becomes an aunt for the first time. This has all been the best year of my life.

“To be honest, I’m amazed and overwhelmed Teresa won, but not the slightest bit surprised. It’s simply what she does. She has a way of defying the odds. She defies the odds every time and wins every time. The first time she ever entered a local pageant, she won! She just wanted to try it because her sister was in a pageant. So she tried it, and she won.

“The next time she’s in something, she wins for the Teen Miss division. Then in her very first year of high school after all our home schooling, she lands the lead in the first play. She’s just an amazing girl. She’s constantly doing her own thing and working really hard. I don’t know who she takes after -- Mom or Dad. She’s a good blend of both of us, and God has just blessed her. It’s not us.”

Janie also told me that Teresa, who rang the NASDAQ opening bell on Wall Street in New York this morning, cried when she was announced as the new Miss America. “She did the same thing when she won Miss Nebraska. Knowing where we come from, it’s a wonderful thing that she can become Miss America,” she added.

I pointed out that celebrity pageant judge Tony Dovolani had told us earlier in the week that he had at age 15 fought in the Yugoslav civil war carrying a rifle before he escaped to Italy, too, and onto America as a political refugee.

Grandma Scanlan said: “My American Dream first came true that we arrived here. Then I start watching this Miss America Pageant, and I thought it was incredible. Living on the tiny island of Ilovik with no roads and just 300 people, I had never seen anything more beautiful than Miss America. We were refugees. My husband escaped first, and then two years later, I followed him, and we got married in Italy. He escaped in 1953 during the Communist civil war.

“Now I’m sitting right here and seeing the glory right now. I never, ever thought I’d have a granddaughter who would be Miss America. Nobody from my family would ever believe it, either. This is an amazing country, the best country in the world.

“Six years ago, Teresa came to visit the island for the first time to celebrate with the whole family and grandkids. Still no cars or roads. Still very few people. When she finishes her year as Miss America, she has to return to prove to them all she became Miss America. They’ll never believe it otherwise.”

Teresa’s mom also explained why her daughter had Eating Disorders: A Generation at Risk as her Miss America platform: “Her closest friend at school had a serious eating disorder. She was bulimic. Teresa didn’t talk about it but just took care of it herself. She didn’t want to talk or gossip about her. She never told anybody else about it. She just wanted to help the girl -- and happy to say she did it successfully. She wants to spread that same message this year to young people everywhere who are similarly affected.”

In her first press conference, Teresa told members of the media: “I think my age will help the pageant regain some of its relevance. I’m really excited. It doesn’t matter how old you are. This shows no matter your age or where you come from, you can accomplish anything you want. I want to get a lot of new younger girls into the Miss America scholarship program.”

I had to ask Teresa’s mom how she felt, after they kissed and hugged goodbye to their daughter, that they’d see her in the next 12 months mostly via TV appearances.

“I can’t wait to see her on Fox News and The View. I will get up early to watch,” she laughed about Teresa’s appearances this past Monday. “I’m totally prepared for it. She’s so independent, it’s completely OK with us. She will do fine because she’s always had the confidence and poise of somebody way older. She has worked very hard at everything she’s ever set her mind to.

“I have no worries at all about her being the best Miss America.”

Robin Leach has been a journalist for more than 50 years and has spent the past decade giving readers the inside scoop on Las Vegas, the world’s premier platinum playground.